You Don't Need LT When You've Got PT

Share All sharing options for: You Don't Need LT When You've Got PT

With all this talk revolving around LaDainian Tomlinson and the rumors of a possible trade to New Orleans, there has been one guy on the periphery of this entire situation who has just been brushed aside like month-old trash: Pierre Thomas. 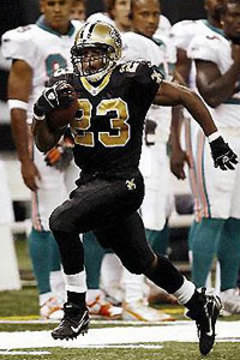 Yeah, that's right, I'm angry again. You all know I am a huge fan of PT. I have wanted to see him become the feature back for this team for quite a while now. As far back as last summer in fact. It was then that I wrote a post declaring that Pierre gets no respect. Here we are another season later and he still doesn't get any respect. It seems there are people out there in Who Dat Nation who would like nothing more than to see the Saints actually pick up Tomlinson.

And it's too late to apologize because the damage has been done. You see, it doesn't matter what happens with LT. It doesn't even matter if the rumors are true or not. What matters is that the second the possibility of Tomlinson coming to New Orleans became even the slightest reality, some Saints fans were salivating at the mouth and immediately on the bandwagon. But the money that a guy like LaDainian is going to command means he would inevitably be the feature back in whatever offense he's in. So if he were to come to New Orleans, what would that mean for our other running backs? Solutions for Reggie have been offered.

That's a question the Saints never have been able to fully answer. Bring in Tomlinson and the backfield suddenly gets very crowded. Maybe you move Bush to wide receiver or use him as some sort of hybrid receiver/running back. Or maybe you just pull the plug and trade Bush for a draft pick or two (after all, the Saints only have four draft picks right now).

So we've talked about the options with Reggie and we've considered his feelings. Yet nothing has ever been mentioned about Pierre. Poor little Pierre.

Bringing LaDainian Tomlinson to the Saints would be pulling the rug out from underneath Pierre Thomas. In everyone's LT speculations, Thomas just remains as a backup option. Having worked his butt off for two years and exceeding everyone's expectations as an undrafted free agent, Thomas doesn't deserve that. In fact, what he does deserve is the starting running back spot for the 2009 Saints. He has done little to nothing for anyone to believe otherwise. Doubters may cite the handful of short-yardage failures late in certain games last season but the offensive line deserves most if not all of the blame for that. If Pierre Thomas isn't handed the reins as the number one back in Sean Payton's offense this year, I am going to be one unhappy camper.