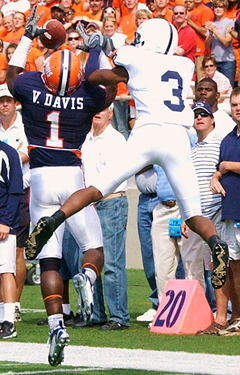 Davis has the reputation of being the best all-around athlete among this year's crop of defensive backs. Photo Source

Davis burst on the scene as a true freshman in 2006. As the brother of San Francisco's Vernon Davis, and playing in the Big Ten, he came in for a lot of attention, and draftniks have eagerly followed his development. "Throughout his career, Vontae Davis has demonstrated the same caliber of jaw-dropping athleticism as his older brother -- and been even more impressive in his ability to transfer that athleticism into gridiron success. Despite leaving after his junior season, Davis is a two-time first-team All-Big Ten selection at cornerback with a history of stepping up his play against top competition." [NFLDraftScout]

"One of the most physical corners in the country, Vontae Davis didn’t have the same kind of production he enjoyed as a sophomore this past season. But a lot of that has to do with teams not challenging him as much, and from the numbers he posted at the Scouting Combine, it’s no wonder why he wasn’t tested." [Scout.com]

"He is an excellent athlete, with very good speed and has the ability to mirror receivers down the field. He also has a solid build, is tough, and very aggressive on the field. He is an all around corner that will not back down from any challenge, and usually comes out on top when he is issued one." [FootballsFuture.com]

"He would be a great fit for an aggressive team because he's an excellent blitzer. Davis is just as comfortable rushing the passer from the corner spot as he is in coverage." [FFToolBox.com]

Davis has run neck-and-neck in the rankings with Ohio State's Malcolm Jenkins for months. But Jenkins has what was considered a sub-par Combine, and the buzz immediately began that he was more suited to playing safety in the NFL. Not so with Davis. He ran the fastest 40 time of all the "elite" prospects (only Nicholls State's Lardarius Webb ran faster) and bench-pressed more than any other defensive back. But...of course there had to be a but...

Maybe it's in the genes. Davis suffers from the same rep as his big brother Vernon: insanely talented, with an attitude problem. "But for all his athleticism, there are concerns about his desire and consistency." [Sporting News] "Illinois head coach Ron Zook did not start him versus Iowa in 2008 because reportedly felt he wasn't playing as well as he could. Lack of visible improvement from sophomore to junior year is a concern." [ESPN] " Concerns that Vontae, like his brother, Vernon Davis, may lack the drive to turn his unique athleticism into NFL success." [NFLDraftScout.com]

The result of all this is a wildly-fluctuating opinion of where Davis will be taken. Sporting News claims that Davis "doesn't possess the intangibles of a first-round talent, [but] he's worth a second- or third-round pick and should eventually become a starter." I'm not sure what to make of that, however, since they also rank him as the 29th best player in the draft. ESPN ranks him at 24th; NFL Draft Scouts has him even higher, at 16th. Scout.com has him ranked the 12th-best player in the entire draft--yet in each case, Malcolm Jenkins continues to be ranked higher, despite all the talk--coming from the same quarter--that Jenkins may be a safety in cornerback's shoes. This either says something about Davis, or about the people doing the ranking.

Davis had a chance to answer his critics during the interview sessions at the Combine. "Everybody’s going to find a negative, but that’s the main thing," Davis said, when asked about the perception that he’s a high-risk option who doesn’t respond well to coaching. "That’s why I’m here at the Combine, so I can show these coaches that I am a good person and I have a good personality." [Pro Football Weekly] One person who was totally smitten was our own Jeff Duncan: "The kid has a great smile, looks you in the eye and answers every question honestly. Not sure if he can check Steve Smith in single coverage, but in the interview sessions he performed like a Pro Bowler." [Nola.com]

I know where Vontae can find a good press agent.

Sporting News compares Davis to San Diego cornerback Antonio Cromartie. Why? Each came out early? Each has an O in his name? I wish Sporting News would explain the reasons behind these comparisons.

I also wish I had a new Ferrari. I'll let you know which one happens.

Not too long ago--about last Wednesday, in fact--it would have been physically difficult to make your brain form the second question. But now, with Jabari Greer signed and Mike McKenzie at least claiming that his rehab is going just fine, it looks as though the Saints have that cornerback problem all taken care of. Of course, these are the Saints we're talking about, so maybe we can never have enough corners. So if Vontae Davis is still available at 14, he remains a possibility. Let's name that possibility "Meh."

What we really need is a good free safety. There has been a lot of talk about McKenzie rotating back to the safety position, some pro, some con. But if the Saints don't do anything in free agency to correct their safety problem, and they take Davis in the first, my bet would be that moving McKenzie is exactly what they have in mind. Because...they can't start the season with Kaesviharn or Bullocks. Can they? Anyone? Buehler?

Vontae Davis is majoring in "Speech Communication," according to FightingIllini.com. What non-speech communication might be I don't know...maybe semaphore.

Davis played both ways in high school, gaining over 1,000 all-purpose yards in 2005. His team won the Turkey Bowl.