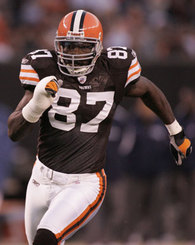 I don't know why they brought him in. (Photo Source)

Though slowing down, the Saints continue to take a look at free agents still on the market. Last night the team sat down with Cleveland Browns tight end Darnell Dinkins. Though the Browns traded Kellen Winslow to Tampa Bay not too long ago they just signed Bills tight end Robert Royal last week. With other tight end Steve Heiden in the fold, Dinkins is expendable.

To be honest, there isn't much info on this guy. Dinkins has played seven seasons in the NFL but only has three touchdowns and has never had more than ten catches in a season. There is absolutely nothing impressive about his numbers as it appears he get used sparingly on offense. But as a role player his reported strengths are blocking and special teams, things that don't necessarily show up on the stats sheet.

Here are a few interestingly random facts about Darnell from the Cleveland Browns official website.

Here is a video from BlackTVOnline.com. Skip to 5:50 for an interview with Darnell.

Ummm...not really. Who is that other tight end the Saints have? Oh yeah...Shockey. He's got the starting spot. Obviously. And I've gotta say after 2008, I'm a Billy Miller fan. He's earned his spot as the number two option in my book. Plus, the ink is barely dry on tight end Dan Campbell's contract. Aren't the Saints really tight on cap space too? Is tight end where they want to be spending money right now? This one really isn't making much sense to me. The only reason I could possibly see a need for Dinkins would be as a special teams contributor but based on the sentiment over at SB Nation's Browns blog, Dawgs by Nature, that might not be such a great idea...

Perhaps the best news of all is that this could mean the team won't re-sign veteran TE Darnell Dinkins. Many of us agree that Dinkins was not a threat as a receiver, and would far too often be on the receiving end of a special teams penalty.

I don't care how well he dresses...I think I'll pass.