Deuce Could Still Be Diamond in the Rough for Another Team

Share All sharing options for: Deuce Could Still Be Diamond in the Rough for Another Team 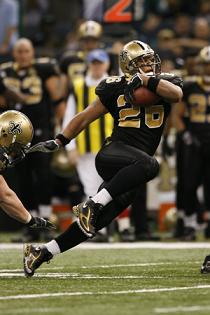 "Remember when you were young, you shone like the sun. Shine on you crazy diamond." -- Pink Floyd

It's been almost three weeks now since we've bid a fond farewell to our old buddy Deuce McAllister. Though I love him like a brother, it's no secret that he isn't the player he once was. Yet there very well may be a little left in his tank and we know he still wants to play the game of football. As we discussed earlier this week in relation to Lance Moore, the second wave of free agency is now upon us and this means that it's time for teams around the league to start looking at the not-so-hot commodities left on the market, hoping to find that diamond in the rough. After being released by the Saints, Deuce would love nothing more than to be that diamond.

A short article in the Times-Pic a little less than a week ago revealed that Deuce is rehabbing from an arthroscopic clean up job but has already had interest from other organizations and hopes to work out for teams this month. So who are those interested teams?

I ran across this quick FanPost written by a reader over at Revenge of the Birds, SB Nation's Arizona Cardinals blog, and I have to say it brought a smile to my face. Here is what at least one fan in Arizona is thinking...

I think Mcallister would be a much more productive runningback (as long as he stays healthy) and would and [sic] some more power to the running game. He's a smash mouth style runner that we need desperately.

A further search of all SB Nation revealed that Deuce had also been a topic of discussion among 49er's fans at Niners Nation.

Sure, he’s 31 this year but he’s the workhorse that the 49ers would need, the “tough guy” in two-back smash-mouth system...I am not necessarily advocating the signing of Deuce, just thought he'd be a good discussion starter.

Okay, so these guys aren't Peter King or Pat Yasinskas but they're fans and they know their team and its needs. The point is that it's nice to know that at least someone, anyone, thinks he can still be as valuable as we hope he can. I hate to use cheesy cliches and the oft used "One mans trash..." is one of the worst offenders (so is "diamond in the rough" come to think of it) but I'll be damned if that doesn't ring true in the NFL today. 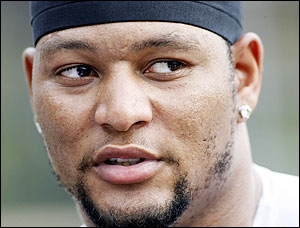 Now there's a look in your eyes, like black holes in the sky. (Photo Source)

"Nobody knows where you are, how near or how far. Shine on you crazy diamond." --Pink Floyd

McAllister may very well workout for a few teams in the near future but there is no telling if he'll really be ready. I imagine that getting offered a contract anywhere near this point in free agency would actually be a best case scenario of sorts for Deuce. The reality is that it might take a bit longer than that; perhaps not even until training camp and by a team who is not willing to pay too much or commit too long. I certainly wouldn't expect him to make anywhere near the salary he was due here in New Orleans. There is also the 4-game StarCaps suspension hanging over his head. That certainly doesn't help his stock.

To be sure, we all wish the best for Deuce and want nothing more than to see him succeed yet again. I hope he's in Russia somewhere, preparing himself for the 2009 season Rocky IV style. What we can't be sure of, however, is how many coaches and GM's throughout the league will be willing to take a chance on Dulymus. Perhaps Drew will lobby for his newest former running back as he has for LT, his old running back. I'm certainly pulling for him and eventually we'll probably see Deuce McAllister play in another uniform. Until then, he remains a diamond still hidden among the roughage.

Shine on your crazy diamond.