"Right now, I'm finishing up with classes and getting ready for my Pro Day. It's not as stressful as the Combine. You don't have the interviews or the doctors checking you. You just show up, run the 40, do the position drills.

"I am going to run again. My agent talked to a lot of teams and a lot of scouts, and the coaches like me. They don't think the 40 is a big deal, but they're coming to me saying that to sell it to owners, it makes owners more comfortable seeing a 4.4, rather than a 4.5. If I get a better time, it should help me out a lot with the guys in charge."

When Jenkins says, "it should help me out," what he means is: I want to play cornerback. 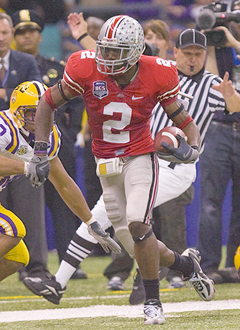 Malcolm Jenkins returns an interception against LSU. Will he be coming back to Louisiana? Photo Source

Malcolm Jenkins spent a considerable portion of his college career as the consensus choice for best defensive back in his class. He was said to possess it all: speed, smarts, hands, the works. He was NFL draft gold. And it all fell apart in one week last February, long after his last college game was over. Now, Jenkins may be lucky ever to play cornerback in the NFL.

That's not to say he won't play in the NFL—he's still considered a lock for the first-round, and a lot of people still project him as Top Ten material. It's just that he may play safety instead. Because there's this little matter of a 4.55 40 time, when "according to the Ohio State Athletics website, Malcolm Jenkins runs a 4.3 in the 40 yard dash, a time that will have scouts drooling on their stop watches if he can do it." [FFToolbox.com]

He couldn't do it; and that poor time in the 40 opened the floodgates on poor Jenkins. But it was not unexpected: before the Combine, the Associated Press published a story on the already-simmering debate. After the Combine, it all came to a boil. Mike Triplette of the Times-Picayune quoted NFL.com's Mike Mayock:

"[The slow 40 time] hurt him a little bit. That's going to open some eyes and re-kindle the conversation as to whether or not he should be a free safety. He's got the size and the strength and the physicality to play the position." The time could be bad news for Jenkins, who was hoping to solidify his place among the top five prospects in the draft. But it could be good for the Saints, who have the 14th pick and need help at both the cornerback and safety positions. "(Jenkins) is a guy that some people are trying to figure out if he's a free safety or corner," Mayock said. "Some people think he's a Pro Bowl free safety (in) Year One." [Nola.com]

So here's Jenkins, after four years of proving himself in college, after several seasons of being The Top Guy when it came to cornerbacks, and suddenly his NFL career is in jeopardy before he's even drafted. You can't blame him for feeling a little weirded out.

''It's funny to me because you have four years of film and you think you're doing well and none of that means anything,'' he said of the draft process. ''Everybody has something to prove.'' [Ohio.com]

And then, there's this:

"Jenkins has outstanding size, cover skills and speed that make him one of the nation’s elite defenders. He has quick feet, fluid hips and has the ability to blanket most receivers he lines up against. He anticipates the action extremely well and uses his quick burst to disrupt a play. He possesses great ball skills and demonstrates game changing ability on defense." [Scout.com]

"Jenkins is a top-notch athlete with rare quickness and playing speed for a 6-0 cornerback. With improvements in his backpedal and ball skills, he could make the Pro Bowl. His talent, size, competitiveness and intangibles make the NFL future bright for him." [Sporting News]

"There isn't much NFL scouts don't like about Jenkins. Athletic, intelligent and consistent, Jenkins surprised many when he elected to return for his senior season despite a first-round grade from the NFL Advisory Committee in 2008. The three-time first-team All-Big Ten pick and two-time All-American improved his overall consistency, winning the Thorpe Award as the nation's elite defensive back as a senior. A shutdown cornerback who intercepted 11 passes over the past three years, Jenkins was effective at cutting the field in half and sometimes moved him to free safety to generate big plays. A first-round caliber prospect at safety or cornerback, Jenkins' consistent play and versatility should land him a spot in the draft's Top 10." [NFLDraftScout.com]

Obviously, a lot of the draftniks still love Malcolm Jenkins. In fact, in most mock drafts I've seen, despite the poor 40 time, despite the talk about moving him to safety, Jenkins consistently gets taken before Vontae Davis or any other defensive back. NFL Draft Scout rates him the 7th-best prospect in the entire draft; ESPN has him ranked 10th, and Scout.com has him 6th.

Given those rankings, he seems to be a long-shot to reach the Saints at #14. But things happen.

Sporting News compares Jenkins to Dallas' Terence Newman. I don't see this. Jenkins is two inches taller and ten pounds heavier, and ran a 4.39 when he came out of Kansas State in 2003. More on the mark, to me, is Matt McGuire's assessment: "Player Comparison: Antrel Rolle. Rolle was pretty much the same prospect Jenkins is when he came out for the NFL Draft in 2005. Rolle was also a big hitter, team leader, but with questionable speed who eventually moved to safety for Arizona." [WalterFootball.com] Rolle is listed as 6' 0", 208 lbs., and posted a 4.49 40 time in 2006. That's a much closer comparison—and it lends credence to the claims that Jenkins would make a better free safety.

Most experts are still convinced that Jenkins is a beast. They just aren't quite sure what kind.

It's always risky to draft a player thinking that you'll play him at a position different from what he played in college. Jenkins could be an All-Pro NFL cornerback, or he could be a bust. Move him, and he could bust at safety, or be the next Ed Reed. More likely, he'll wind up being solid but unspectacular at either position (most players are). After consecutive seasons of relying on subpar safeties, solid would be good.

Malcolm Jenkins loves to hold superheated pieces of metal against his skin until they burn away the nerves and leave a permanent scar. Really.

I have one frat brand on my arm, and another on my chest. I got the first one two weeks after initiation, in June 2007. It hurt. You take a wire hanger and heat it up, hold it on there for a few seconds. After it's off, the nerves burn off, and you're OK. It scabs up, and takes about six months to heal all the way.

It's what our frat does. It's a choice you have, but like tattoos, it gets addicting. The second one, I got in February 2008. We were hanging out, and someone said, "I want another brand," and we all wound up doing it.

Branded!
Scorned as the one who ran (slowly)!
What do you do when you're branded a safety...
and you know you're a cornerback!*

*stujo4 and I may be the only ones who get this.