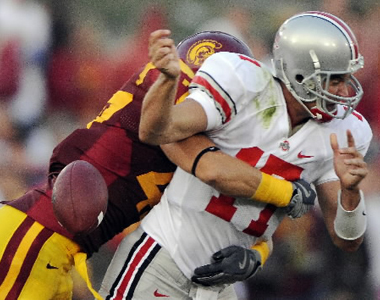 Clay Matthews III promises to be the third member of his family not only to play in the NFL, but to be drafted in the first-round. (Photo Source)

Clay Matthews III is the son of linebacker Clay Matthews Jr., the grandson of defensive end Clay Matthews Sr., and the nephew of Hall of Fame tackle Bruce Matthews. That's quite a pedigree to live up to, especially when you began your college career as a walk-on and nearly ended it on the bench. Matthews didn't even start until the fourth game of his senior season. Now, he's a consensus first-round pick. How does a single season make so much of a difference?

The short answer is: it doesn't. What does make a difference is a good senior season, and an excellent showing at The Combine. Matthews did have a standout season, recording nine sacks; but he really wowed them in Indianapolis. His 40 time was the fourth best among linebackers, faster than Brian Cushing and Clint Sintim among the linebackers, and Brian Orakpo and Everette Browne among the defensive ends.

"While teammates Rey Maualuga and Brian Cushing certainly earned more attention throughout their respective careers, it is the former walk-on Matthews, Jr., who some scouts feel ultimately could be the best of the bunch. Considering he came to USC as a 166-pound linebacker and tight end with only Idaho offering him a D-I scholarship, his rise to stardom has been remarkable." [NFLDraftScout.com]

"[Matthews is] disruptive off the edge and makes a lot of plays in the backfield. He’s an outstanding blitzer and is aggressive at the point of attack. " [Scout.com]

"Is an effective pass rusher, using his speed to get through the hole and sack the quarterback. " [Sporting News]

"USC's Clay Matthews is one of the early draft risers this year. Once projected as a middle second round prospect, Matthews shot up on many draft boards with an impressive showing in the 2009 Senior Bowl classic. Blessed with a good frame and uncanny speed for it (4.68), Matthews could prove to be the best of the available USC linebackers in this draft. [FFToolbox.com]

Of course, this all begs the question: how do they know? Matthews started only ten games in his senior season--his only season as a full-time starter. Some feel there just isn't enough data there to make an informed decision. In the words of NFL.com's Mike Mayock: "No comment." [NFL.com]

Not all of the expert assessments are positive. Matthews is not without faults--but, as is the case with his strengths, nobody seems to be sure exactly what those faults are. Check this out:

Who's right? Who knows? With only a single season to evaluate--and only a partial season at that--the tape that doesn't lie is largely silent. Matthews looks to be a solid player with a great upside, but exactly what system he fits best into is largely a mystery.

Sporting News compares Matthews to Baltimore linebacker Jarrett Johnson. Johnson was a sack machine at Alabama, just as Matthews was in his senior season at USC. But since being drafted by the Ravens, he hasn't really done much until last season--his sixth--when he recorded five sacks in 57 tackles. That kind of productivity may start, but it's not worth a first-rounder.

Are Payton and Loomis willing to gamble a first-round pick on a prospect who only has one starting season under his belt?

They haven't done it before...quite. Reggie Bush and Sedrick Ellis were both well-established stars by their senior seasons. Robert Meachem, on the other hand, declared as a junior, after a breakout season in which he established new records at Tennessee. However, Meachem was already known as a top receiver before 2006--even though he didn't start many games, he still led Tennessee in receiving yardage in both his freshman and sophomore seasons.

So there's really no precedent to go by. If the Saints are looking for a rush linebacker to add more impact to Gregg Williams' blitz packages, Matthews is ranked right up there with the best outside linebackers and defensive ends. At least, we think he is.

If the Saints draft Clay Matthews--or Brian Cushing--in the first round, that will make the third time in four seasons that Payton and Loomis have tapped Pete Carroll's program.

While it may be difficult to say anything for certain about Clay Matthews' on-field performance, it's pretty much impossible to say anything about his off-the-field life. His father and uncle are founts of trivia questions--for instance, they appeard on Family Feud (they won)--but even in the trivia department, Clay Matthews III remains largely an enigma.