Pardon me for being offensive. But now that we've "filled the holes in our defense," as some would say, it seems more and more possible that we'll be looking at an offensive player in the first round of the draft. Not likely, mind you—just possible.

What's more, it seems most likely that that player, should we take him (or her...I suppose that's possible, too) will be the short yardage back that Payton supposedly lusts after (that's why you can't entirely discount a her). Unless PayLoo rank LeSean McCoy higher than does anyone in the known universe, and unless both backs happen to be gone by the 14th pick, I'm going to assume that the running back sweepstakes will come down to two players: Chris Wells of Ohio State, and Knowshon Moreno of Georgia.

Both have good reps; both are capable of getting tough, inside yards; both are, in this humble writer's opinion, superfluous. But there's no accounting for what a draftnik in the throes of bestplayeravailablitis might do, so we'll just have to get through this. 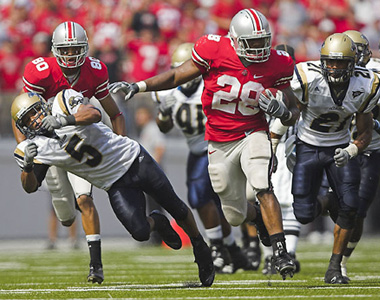 A lot of people are expecting the Saints to pick someone from THE Ohio State University in the first round. It might actually be Chris "Beanie" Wells. [Photo source] 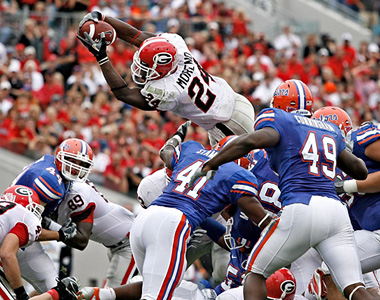 ...but on the other hand, perhaps Knowshon Moreno would be a better fit with the Saints' offense. [Photo source]

At first glance, it would appear to be no contest. Despite his rep, Knowshon Moreno, on paper, doesn't really stack up to Chris Wells. "Beanie" is bigger; he's faster; he's had more experience, more yards, more touchdowns, a higher YPC. But he's the number one-ranked running back on only about half of the prospect lists—and it's because, while he may have all the stats, Moreno has all the intangibles.

Moreno is a better leader; he's more motivated; he's a better blocker, a better receiver—and most of all, he doesn't carry the stigma of being fragile. Chris Wells suffered through several nagging injuries while at THE Ohio State University, including a sprained foot that required a special shoe. Moreno has never missed a game.

Chris Wells:
"Extraordinary combination of size and natural running ability. Downhill runner who attacks the line of scrimmage when running inside. Shows the patience to pick and slide laterally. Good burst to and through the hole. Despite his height, generally runs with good pad level, giving defenders little to target other than his knees and shoulder pads. Rare size and leg drive to move the pile. Rare vision and lateral quickness for a back of his size." [NFLDraftScout.com]

"Displays a vicious stiff-arm, which he often uses to gain additional yards at the end of runs. There are times when he runs like a man possessed." [ESPN]

"Wells is a big back who has the ability to break free in the open field. He has great vision and displays patience when identifying a hole to attack. He sets up defenders nicely using his deceptive shiftiness and features a strong stiff arm to pick up tough yards. He has the ability to carry the load and take over a game." [Scout.com]

"He looks the part of an NFL starter and has the athleticism to match...is clearly the top running back in the draft and has the talent to be a special player in the NFL. Look for him to be picked in the top five overall." [Sporting News]

"Beanie Wells is kind of back who can carry a franchise ... He's an elite talent - very near to the same grade I gave Adrian Peterson ... Dominant player who could fall a bit in the NFL Draft because the demand for running backs in the NFL is extremely low." [WalterFootball]

Knowshon Moreno:
"Good quickness to the hole. Reads the defense and anticipates where the hole, including cutback lanes, will appear. Exceptional lateral quickness and elusiveness in tight quarters. Very rarely tackled by the first defender. Good acceleration past the initial wave of defense and into the secondary. Good spin and stiff arm, and has phenomenal leaping ability to jump over tacklers. Attacks the line of scrimmage and is a tougher interior runner than given credit for." [NFLDraftScout.com]

"Adequate height and bulk but will need to get bigger and stronger to hold up in the NFL. Is quicker than fast. Top-end speed is adequate but not great...His reckless running style and undersized frame creates legitimate concern regarding his long-term durability in the NFL." [ESPN]

"Moreno is a tremendously gifted offensive weapon who is a threat to take it to the house any time he touches the ball. He runs with outstanding pad level, displays great vision and tremendous cutback ability. He has a quick first step and is lethal on the edge. He’s deceptively strong between the tackles and will fight for extra yards." [Scout.com]

"Moreno is one of the most physical running back prospects our scouts have evaluated in recent years, and he has the talent to be a solid NFL starter. Despite his lack of elite speed and burst, he is faster than expected and outruns defenders who have angles on him. What's truly impressive is his ability to move well in tight quarters, a trait that separates the good NFL backs from the elite ones. That skill will make Moreno a first-round pick." [Sporting News]

"Moreno has earned my 5-star, elite grade because he is an every-down back with an elite talent level, whom I would consider as being a better prospect than Adrian Peterson coming out of college. If some team gets Moreno in the mid-first round or later, they are getting a mega steal. I really have no idea why Moreno is so underrated." [WalterFootball]

Chris Wells:
"Primary concern - and the only one that will keep him from being a top 10 pick - is Wells' struggles with durability. Fought nagging injuries throughout much of his career at Ohio State and some have questioned whether he knows the difference between pain and injury. Sat out three full games and parts of several others (including the 2009 Fiesta Bowl -- his final game in a Buckeye uniform) with foot, hamstring and head (concussion) injuries. May lack natural hands for the reception. Has only caught 15 passes for 84 career yards and too often double-clutches. Inconsistent effort as a blocker." [NFLDraftScout.com]

"Was bothered by nagging injuries throughout his career. Only full games missed were in 2008, when he sat out three contests (Ohio, USC, and Troy) due to a lingering toe injury, and he was limited in parts of others because of toe, hamstring and head injuries...Limited experience as a receiver at Ohio State. Caught just eight passes in 2008 and five passes in 2007...doesn't show much savvy or creativity as a route runner. He basically goes to a spot and sits...His overall effort is inconsistent. He takes himself out of games. If he has a big run he frequently takes the next two plays off. Not always a self motivator. Has taken himself out of multiple games because of questionable injuries. Scouts are concerned that he was coddled too much at Ohio State and will be shocked by the adjustment in the NFL. Wells also has ball-security problems. He lost four fumbles last season." [ESPN]

"Does not always stay after his blocks. Must use better technique...Is not a natural pass catcher. Tends to fight the ball at times. Does not seem comfortable catching the ball....Has struggled to stay healthy during his career at Ohio State. Was limited last season by a foot injury he suffered in the season opener. Must prove his toughness in the NFL." [Sporting News]

"Very questionable hands out of the backfield ... Doesn't hit the hole very hard and running lanes do close on him sometimes because of this ... Doesn't put much effort into pass protection and lacks awareness in this area." [Walter Football]

Knowshon Moreno:
"Questionable top-end speed. Lacks the prototype size and bulk some teams are looking for in a bell-cow runner. A bit flashy, and will celebrate a bit too much after big plays." [NFLDraftScout.com]

"His reckless running style and undersized frame creates legitimate concern regarding his long-term durability in the NFL. Is a bit undersized and will be overmatched physically on occasion" [ESPN]

"Lacks the explosive burst and elite speed to get the corner on his own; needs blockers...Struggles to make long breakaway runs." [Sporting News]

"Physical running style could lead to a shortened NFL career if he gets too many carries early on ... Preferably, you want running backs above 210 pounds, but this is being quite picky." [WalterFootball]

There is no shortage of comparisons for these two, and all the comparisons are flattering. Former running back Archie Griffin of THE Ohio State University recently said that "Chris Wells is the closest thing to Jim Brown that I've ever seen." And it wasn't even his own idea: he was merely repeating what Dick Tressel and Eddie George had already said.

Then again...can you say "homer"? I knew you could.

Those without agendas still praise Wells highly. Sporting News compares him to Adrian Peterson; Matt McGuire, to Bo Jackson. Moreno is no slouch, either, but hasn't been compared to Jim Brown quite yet. McGuire says he reminds him of Marion Barber, III; while the Sporting News makes what is to me the downright peculiar comparison to Shaun Alexander--a great back in his prime, but the opposite of Moreno in his reputation for not liking contact.

It looks like whoever gets either of these two will be getting a solid NFL starter...and maybe even a Hall of Famer.

WHAT DOES THIS MEAN FOR THE SAINTS?

There are two questions to ask here: 1) Do the Saints need to take a running back in the first round? and 2) Which running back should they take?

Do they need to take a running back? No...but then, they don't need to draft ANY position anymore. Their starting line-up is solid, and I doubt any rookie from this draft is going to start. It's going to come down to whoever Payton and Loomis think is the top player available at the time. I strongly doubt that they'll actually be targeting a running back; but they will have both these guys high on their board, and if either of them happens to be the top player left when we reach #14...boom.

Wells is big and fast. He might be the big back that Payton craves...except that he has a tendency toward nagging injuries, a slight penchant for fumbles, and questionable motivation. That last would disqualify him—no coach would rather deal with a lazy player than a gamer—if it weren't completely overshadowed by his marginal utility in the passing game. Wells isn't simply a mediocre receiver, he's a mediocre blocker—something Payton and the Saints cannot afford. Plus, he would be far too expensive to use purely as a short- yardage back: whatever back gets drafted in this position will start.

That leaves Moreno. But as I pointed out in an earlier post, Moreno is essentially Pierre Thomas. He really doesn't bring us anything that Thomas doesn't already supply—except possibly something intangible, something not yet apparent to anyone. If the Saints can't open holes for Thomas in short yardage, I doubt they'll be able to do so for Knowshon Moreno, either...or maybe even for Chris Wells.

What it comes down to is this: Moreno is so similar to Thomas that there's no point in spending a first-round draft choice on him. Yet he's a far better fit for the Saints than Wells. If they draft a back, they should choose Moreno.

WILL THE SAINTS DRAFT A RUNNING BACK?

Unless we trade down in the draft—at which point this entire exercise will be rendered academic—we'll be using the 14th pick. Take a look at where Wells and Moreno are rated overall:

The average of all these ratings...is 14.