Share All sharing options for: Gentleman, Mock Your Engines! 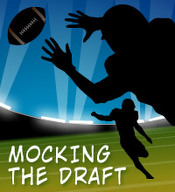 For all you draft freaks out there, it's time to start getting excited. Back by popular demand is SB Nation's own mock draft among SB Nation writers, hosted over at Mocking the Draft.

For those of you who were around last year, you will remember that this was something we did last spring and it went very well. We've got a new guy in charge this year, Mocking Dan, and he has been doing a fantastic job keeping everything rolling smoothly and offering great draft coverage.

Mocking the Draft is the ultimate mock because the picks are made by all of us writers who know our teams better than anyone. They will be coming out at a rate of three per day so be sure to follow along regularly to keep up with what's going on. Get active over there, make comments and tell 'em how you feel. It's a two round mock so that schedule puts us on pace to complete right in the middle of April.

The first three picks were already posted yesterday and it continues today so head on over and catch up on the action. Now!