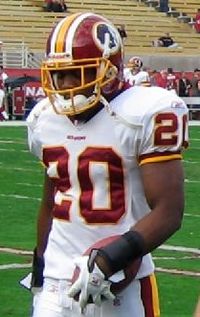 If you believe in Gregg Williams than you have no choice but to believe that the acquisition of safety Pierson Prioleau is a good pickup. Prioleau has followed Williams his entire career. It's actually a little crazy. Prioleau explains the relationship...

"When Gregg gave me that second chance, I fell in love with his style of game, the way we played the game and the way he coached the game. I became a true professional and he developed that trust in me, I guess. It's a trust relationship."

So we can only hope this will turn out to be a good thing.

Okay, so his stats aren't too spectacular but the addition of Prioleau - and the subtraction of Kaesviharn - gives the Saints at least an inkling more of something they haven't had at the safety position for quite some time: depth. Because he's followed Williams for years, learning the system will not be a problem. Better still, with eleven years in the league and veteran status, he will be able to help teach it to other players who are learning it for the first time. Definite bonus.

I don't expect Prioleau to win the starting spot but knowing the system will certainly give him an advantage. What will really make him valuable, however, is his versatility and his special teams contributions.

"I learned to play special teams in college, and I did it in San Francisco, probably not as well as I could have," Prioleau said. "But once I got to Buffalo, I found my old love for the teams. And I always promised myself no matter how many downs I played on defense, I'd always play teams. I'd say that's a big part of why I'm still around today."

Sure, why not? Seriously though, this could turn out to be good. I'm all for improvement and more depth at the safety position and pulling the ol' Prioleau/Kaesviharn switch-a-roo seems like a pretty wise move though I'll it's the Kaesviharn part that's got me more excited. As we look to the future I also think this makes drafting a safety in the first round this year a little less likely. Running back anyone?