Just when you thought they were done signing free agents the Saints have gone and done it yet again with their acquisition of defensive tackle Rod Coleman. As I searched around the vast internet for any and all info I could find on Coleman it was actually our very own Dave the "freakin" Falconer who I think summed it up best in his own prophetic way. 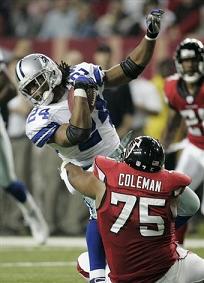 ...teams have to consider signing him as a low-risk, high-reward project.

Well played Falconer. That seems to be exactly what the Saints have done by signing Coleman though I'm willing to bet Dave didn't think it would take an entire year. Coleman signed only a one-year deal and with the organization pressed so tight against the cap I can't imagine the contract could possibly have been worth too much. Dude hasn't even played in a year. But dude was also a fan favorite and one of the best at his position when he wasn't recovering from myriad injuries - including a curious boating accident. It was all those injuries that kept Coleman away from the game last season and off many teams' radar this year.

"I just felt I needed time to get away from it. I just needed a break. Then I could come in fresh during the (next) offseason, work my way back into it and earn the respect and be one of the new faces in the locker room,"

But Colemans previous relationship with new defensive line coach Bill Johnson no doubt played a large part in the Saints ability to sign him.

If the Saints can squeeze just a few more sacks out of "Hot" Rod than it will prove to be a genius move. It's entirely possible. Here is what ESPN had to say about the defensive tackle two years ago.

The eight-year veteran is one of the premier interior pass-rushers in the NFL and leads the league in sacks by a tackle (44½) over the past five seasons. Noted for his quickness and ability to penetrate through the inside gaps, Coleman possesses a rare skills-set.

Need is such a strong word. With six defensive tackles already on the roster they certainly don't need him as a seventh but he could turn out to be a diamond in the rough. Honestly, my initial reaction was that this was a pointless signing but as I actually dug a bit deeper I discovered that I am kinda liking this move. Of course, this probably means the end of the line for another defensive tackle like Brian Young or letting Antwan Lake walk.