Share All sharing options for: Leonard "Dream" Weaver...Come On Down! Pretty Please? 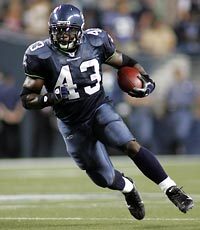 I believe you can get me through the niiiiiight. (Photo Source)

The next player scheduled to make a stop in New Orleans on his free agency tour '09 is Seattle Seahawks fullback Leonard Weaver. Undoubtedly, this look at Weaver is the teams attempt to fix last years late-game, short-yardage suffering. However, Pro Football Central is reporting that Weaver's visit has been canceled because contract terms could not be reached. I don't really know what to believe but I do know this: upon further research, I really think the Saints should take a serious look at Leonard Weaver. If his visit really was cancelled, they should re-schedule ASAP.

Those Saints fans who wanted to see the team pick up Shaun Alexander last year might just have to settle for his equally fast but more anonymous former teammate, Leonard Weaver. An underrated player, Weaver doesn't fit the mold of your average fullback. The Seattle Times puts it well...

a former tight end in college who tends to think like a halfback.

Since filling in for legendary Seahawks fullback Mack Strong (greatest football name ever!), Weaver has actually played a decent sized roll in the Seahwaks offense the last two years; moreso than other fullbacks in the league. John Morgan of Field Gulls gives us some insight.

In 2008, Leonard Weaver was a nationally anonymous but integral part of Seattle's offense. As a rusher he was worth 40 DYAR, had 13 first downs and a touchdown. As a receiver, he was worth 87 DYAR, nearly as much as Deion Branch, 97 DYAR, and D.J. Hackett, 99 DYAR. He caught 75% of his targets and earned 15 first downs. He was a vital outlet receiver and by season's end, a punishing pass blocker. In a bit of an apples and oranges comparison, Weaver's combined 127 DYAR was second only to Bobby Engram. It wasn't a systems thing, it was a one-handed catch, pretty juke, DB baptismal into the dirt thing. He earned it.

On the down side Morgan notes that Weavers run blocking still leaves a bit to be desired.

"As far as him staying in Seattle, I'm sure Leonard would be very happy," Lewis told PFW. "But just being a realist, I don't see it." The reality, according to Lewis, is that Weaver shapes up as a potentially hot commodity on the open market. "He's more of a hybrid running back who can knock over anybody," Lewis said. "When you look at the successful teams right now, you see two-back systems usually with one big running back. Leonard fits that mold, and there should be lots of interest in him."

Finally, check out these quick videos of Weaver laying down the law. Apparently, the guy likes to give a good stiffarm.

Need is such a strong word. The Saints 2008's short-yardage shortcomings won't soon be forgotten but with other, more important needs to be addressed through free agency, the answer might actually lay within and they probably shouldn't spend too much money on a running back. But Weaver looks like a young, very fast, very versatile back with run and catch ability and a nasty penchant for putting his hand in defenders eyes. Weaver is coming off a break out year and his agent seems intent on getting him paid. Chances are good he won't be so unknown after the 2009 season. I am really liking this guy. Really. Unfortunately, I'm worried that situation just isn't right.