This pick and analysis was written by CSC member MT_Always. Thank you very much for your participation MT! 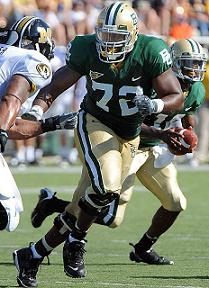 Looking at Detroit's team needs the #1 pick had to be either a QB, LT, or MLB.

I just didn't feel strongly enough about the Quarterbacks in this draft to consider them a #1 overall pick. First round maybe but not the #1. A new QB is needed but dropping one behind a line that lets defenders through at will is a sure fire way to turn a franchise QB into a 3rd stringer somewhere else.
MLB was a strong posiblity but I felt that Detroit needs to build for the future and a new QB is part of that. Putting protection into place and allowing the line to get their feel for each other before the rookie QB lands behind them, I felt would help them more with the overall rebuilding, and get Detroit back to respectability faster. The defensive needs can be addressed with the balance of the picks.

So, that leaves Jason Smith at Left Tackle. Smith will solidify their line. Unconfrimed coaching stats show he allowed only three quarterback pressures and 4.5 sacks in his 24 games at left tackle the past two years. He excels at run blocking, his support here will shore up the left side and should open up lanes left or right for their running game to develop more. With more protection on the left side the passing game will be expanded as the Tight End will now be more then just a blocker. A former TE himself (6 catches for 70 yards as redshirt freshman), he brings a larger understanding of that role which will only help the line on screens. He started for 3 years at tackle for Baylor and has been selected as a Coach's All-Big 12 Conference 1st Team this year. He was an honorable mention the year before despite missing five games with an MCL sprain. The MCL sprain worried me quite alot but he seemed fine in 2008 and finished his career with 39 starts in 42 games, playing 24 at left tackle, seven at right.

Lions Coach Jim Schwartz, had the following to say:

"At the combine, when he was running his 40, he runs the 40 and runs a great time but when he got back to the line, usually those offensive linemen plod their way back to the line. He was bouncing like the defensive backs and linebackers do. If you had seen that and didn't have perspective, you would have guessed that he was a 220- or 215-pound guy. That's the athletic ability. Plus, he's incredibly smart, great personality and a real interesting guy - he rode rodeo in high school. I'd like to see that horse that could hold him. What does it say about Smith that he worked out at his pro day - after working out at the combine?...He's consistent and confident in his ability. It wasn't just a one-time thing with him. There are a lot of players who work out well one time. There are other guys who can do it every single time they go out. If they run a 4.3 40, they can do it at 3 o'clock in the morning or 3 o'clock in the afternoon, at the combine, at the home workout, it doesn't matter. They do it all the time. No. 1, it says consistency and, No. 2, it says confidence that he can do it consistently."