This pick and analysis was written by CSC member DeuceisLoose926. Thank you very much for your participation! 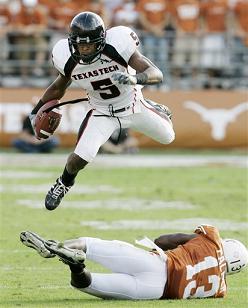 Crabtree missed his calling as an Olympic hurdler. (Photo Source)

For the Rams, I felt their two biggest needs were OT and WR following the recent releases of long time Rams Orlando Pace and Torry Holt. While the Rams were tempted by the availability of Matthew Stafford, they decide to stick with former Saints training camp great Marc Bulger for at least another year. The upside of Crabtree is too much to pass up for the Rams even after his recent foot injury; the game film does not lie. They also considered Eugene Monroe, OT from UVA, but he did struggle in college against several players, including Georgia Tech's Michael Johnson, who, while a phenomenal athlete, was very inconsistent in college and may turn out to be either a great pro, or simply a workout warrior. The Rams may also be concerned with second-year pro Donnie Avery going into camp as their number one receiver. This tandem should become a formidable tandem for years to come in the weak NFC West.