42: The Answer to the Ultimate Question of Life, the Universe, and the Saints?

Share All sharing options for: 42: The Answer to the Ultimate Question of Life, the Universe, and the Saints?

If you understand the title of this post than I will admit right off the bat that you may be a bit geekier than me because I had never heard of this concept before. (I am, however, aware of the All Your Base Are Belong to Us craze.) The title is taken from the science fiction series The Hitchhikers Guide to the Galaxy by Douglas Adams. In it, the number forty two is The Answer to the Ultimate Question of Life, The Universe, and Everything. Believe it or not (I couldn't!), the number 42 has a tremendous amount of significance in other areas of popular culture. You can learn all about it right here. It's also the name of a Coldplay song from their latest album Viva La Vida or Death and All His Friends (It has the underpinnings of In My Place). This is some heavy stuff but what does it all have to do with the Saints? 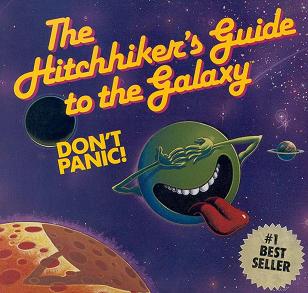 It went quietly unnoticed by many Saints fans yesterday that the newest members of the team chose their jersey numbers for the 2009 season. Here are those new numbers to start getting used to:

The more astute reader might notice that Mike Karney's number has already been taken by newest fullback Heath Evans. No shocker there as Evans has been #44 throughout his career. But what the less observant might not have noticed is that Darren Sharper is not on that list. It seems Sharper is the only Saints player yet to be assigned a number on the official roster.

Turns out Darren Sharper has worn the number 42 his entire career both with Green Bay and the Vikings. Of course we all know which Saint currently wears that number: Jason David. So we can only assume that Sharper is probably trying his hardest to convince David to give it up. In a time when players want certain numbers so badly they are willing to pay big money, buy lavish gifts or make hefty donations to charity in a players honor, it wouldn't be shocking to hear that Sharper is lobbying big time for the number he's always worn. But he's the new guy in town and David has worn the number his whole career as well. He certainly deserves it, right? Than again, Sharper is the league veteran. A case could be made for either side.

Now I'm not one to often question the meaning of life on a regular basis. My opinion is that there is nothing I can do about it so there's no sense worrying. I seek not these answers. But my life, universe and everything does revolve around the Saints, as I'm sure yours does too. I am one to question the New Orleans Saints franchise and because the team is so important to me, the question of my life, my universe and, well, my everything simply boils down to a more tangible and selfish query: Can the Saints defense finally be anything close to decent? The answer may very well be the number 42.

Though I highly doubt that Douglas Adams had the Saints, football or even general sport in mind when he came up with the concept of the number 42 as The Answer to the Ultimate Question of Life, the Universe, and Everything, he may have actually been onto something. Whether Jason David keeps his number and finally thrives in New Orleans under defensive coordinator Gregg Williams' new system or Darren Sharper acquires the number and turns out to be a free agent gem and the solution to the teams serious safety woes, the player who wears #42 could very well be The Answer to Saints fans' Ultimate Question of Life, the Universe, and Everything this season. I'm cautiously optimistic.