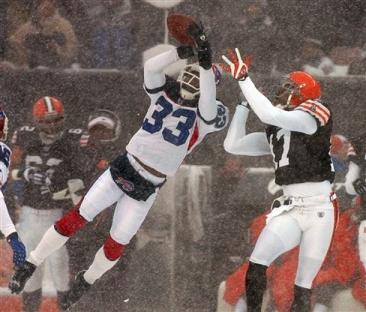 Yet another free agent cornerback is making his way to the Crescent City looking for a new, more lucrative place to play. This time around it's Buffalo Bills cornerback Jabari Greer. Greer is on the smaller side but the former undrafted rookie free agent possesses good ball skills, great work ethic and has put together two quality back-to-back seasons.

Though Greer missed much of the second half of the season with a knee injury, he was quite impressive during the first half. In fact, SB Nation's own Bills blog, Buffalo Rumblings, made him their Mid-Season Defensive Player of the Half.

No player has been more consistent defensively than Greer. He's tied for the team lead with 2 interceptions; he's returned both of those picks for scores. He also ranks fourth on the team with 34 tackles. He's a small guy, but he's also Buffalo's most physical and aggressive defensive back. He has limitations, but he consistently overcomes them. What a pleasant surprise this guy has been for the past two seasons. Give him a contract extension, Buffalo.

However, Jabari is portrayed as a player who is trying to cash in with whatever team will pay him the big bucks. He has already visited three cities and for a while it was looking like he may just return to Buffalo. Buffalo Rumblings again...

Leaving three cities without a good offer, however, has some believing that Greer - currently seeking riches in a rapidly depressing cornerback market - will sign the offer the Bills currently have on the table, believed to be the third offer that Buffalo has made.

That was until the Bills agreed to terms with cornerback Drayton Florence yesterday.

So much for the sentiment that free agent corner Jabari Greer might return.

This means Jabari just got a little more desperate and his value has probably just dropped. This could be good timing for the Saints, who might be able to land Greer for less than they could have yesterday. Whether or not this is the guy they want, however, is a different story altogether. I had to beat them to death with their own shoes.

I did a quick search on YouTube to try and find some highlight videos. There were none to be found and I can't help but take that as a bad sign. But what I did find were the following videos and thought they were too weird funny interesting not to share with you guys. From what I can gather, Jabari Greer had his own or was part of a sketch comedy show called Out of Bounds. It might best be described as an incredibly poor mans version of Kids in the Hall. That might actually be too generous. Watch at your own risk.

The clock is ticking and Greer may be one of the last decent options left at cornerback. If his knee injury is not a lingering problem and he continues to play as well as he has the last two season, Jabari should be an immediate upgrade for the Saints at cornerback. Though he probably won't get the money he wants now with the signing of Drayton Florence he'll still cost a pretty penny.