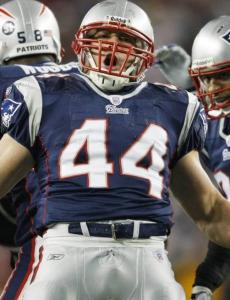 I know we're all sad about the loss of Mike Karney. He was a good guy and we'll miss him. And being let go the day before his wedding just plain sucks, no doubt about it. But we're Saints fans and we move on with the team so it's time for all of us to embrace our new #44.

No matter how we feel about Karney personally, popular logic suggests that Heath Evans is an upgrade at all levels. Mike was always a gritty run blocker but never much of a running back or pass catcher. The new guy, however, has a little bit of everything. Take it from Mike Riess of the Boston Globe...

What do the Patriots lose with Heath Evans agreeing to terms with the Saints?

A little bit of everything, really.

Even Heath would agree with that...

"I always try to tell people I'm not the best at anything, but I think I'm pretty good at a lot of things."

Evans is also incredibly durable, never missing one game in the last three seasons in New England. But he was never used to his full potential because of a very pass heavy, shotgun-oriented offense run by the Patriots. Look for all of that to change this year however.

Here are a couple of random videos with Heath. Nothing spectacular.

Well, the answer to this question is pretty inconsequential since we're now stuck with Heath Evans but the answer is still relevant. The acquisition of Evans may mean more dedication to a running game by Payton in 2009. Or not. I won't even begin to speculate how Payton will actually utilize Heath but I know he's got a plan for him. It might be strictly in a running capacity or it might be as a pass catcher out of the backfield. But best of all, it could be a little bit of both. In fact, the versatility of Evans gives coach just a bit more of the element of surprise and the genius of Payton will keep opponents on their toes. Regardless, the relationship between the two is already evident...

"To be completely honest with you, it was the head coach; he sealed the deal," said Evans, who also was excited about joining an offense that led the NFL in total yards last season.

"At the end of the day, it just felt like, one, it was nice to be desired by a team that had their kind of success. And sitting with Sean and (running backs coach Bret Ingalls), you see opportunities for what they would like the fullback to be there, and those things excited me. And just turning on the film, maybe there's a possibility of adding to an offense that doesn't really need anything else."