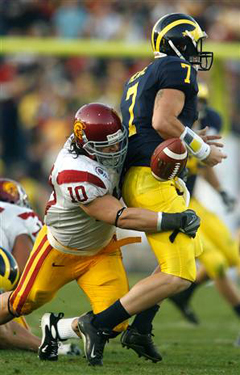 Brian Cushing is known as a relentless attacker and reliable tackler. (Photo Source)

Brian Cushing played SAM (strong-side linebacker) at USC. But he has the reputation of being very versatile, with good football intelligence. "Shows good instincts. Seems to play a step ahead of everyone else, as he locates and gets to it extremely fast. Recognizes play action quickly and does a nice job of staying home against misdirection." [ESPN] "NFL scouts don't admire Cushing for his statistics, but for his versatility. Athletic and instinctive enough to star at linebacker and yet big and strong enough to compete at defensive end -- as he did in starting 13 games at the position in 2006 when injuries forced the Trojans to be creative -- Cushing is arguably the draft's most versatile defender." [NFLDraftScout.com]

We already know that Gregg Williams places a premium on versatility and intelligence in his players, so Cushing would seem to be a natural fit in the aggressive, attacking scheme the Saints will unveil in 2009. Unfortunately, with the positives come the negatives, and with Cushing there is some concern that he may be, in one sense at least, the second coming of Dan Morgan: he is frequently hurt. "Durability is a concern, as he missed nearly half the 2005 season with a shoulder injury. Also missed three games in 2007 due to a sprained ankle." [ESPN] "Has struggled with injuries throughout his career -- missing five games due to a shoulder separation in 2005 and three games in 2007 due to a high ankle sprain, as well as undergoing surgery after the 2006 (shoulder) and 2007 (knee) spring practices." [NFLDraftScout.com] "He had arthroscopic surgery on his ankle prior to 2008 spring practice and was limited in spring drills." [USC Trojans]

These durability concerns--which seem to be nearly unanimous--are not the only knock on Cushing. There is also a strange and probably unfair belief that he may, just may, be involved in steroid use. Cushing himself addressed that concern at the Combine press conference:

"I don’t understand where it is coming from," Cushing told me. "I was tested last December at USC and passed, one of several tests I have passed. I was tested this morning here at the combine and those results should be out in a couple of weeks to a month, I believe. I think people are trying to find something, anything, that would detract from what I have done on the field. You learn in life if it’s not one thing, it’s the other. I hope once I pass the test here that this will be put behind me. I’m really hoping for that." [Thomas George, NFL.com]

The fact is, Cushing has been heavily involved in dietary supplements since he was in high school: "For the past 3 years Brian has followed a program very similar to the one that I posted on 4-01-05. We work on getting brutally strong, eating a clean diet, incorporating the proper supplementation, getting flexible and mobile and then a couple weeks before training camp we get him in shape." [Joe DeFranco, DeFranco's Training] There's no real evidence of steroid use--Cushing is simply a workout warrior from an early age, and his long-term regimen may account both for his athletic prowess and his propensity for injury. But the "pattern" of heavy supplement use suggests to some that he's more willing than the average athlete to rely upon chemistry rather than natural athletic talent. In fact, some have even gone so far as to suggest that if you take away the supplements, Cushing would not be the player he is-- "There’s a big difference between supplements and steroids but what happens if he finds himself maxed out already?" [NFLDraftDog]--and an NFL player reliant upon OTC nutritional supplements is a suspension waiting to happen.

Yet with all these concerns, Cushing is universally considered a can't-miss NFL prospect, a surefire first-rounder, and most draft boards have him rated the second-best outside linebacker prospect, behind only Aaron Curry. His ranking seems not to have risen or fallen since the Combine, which suggests that most people's minds are made up, and Cushing's status is secure--pending only a rise or fall in his positional competition.

Sporting News has a unique feature in which they compare each draft prospect to a current player. According to them, Cushing most resembles Kansas City linebacker Derrick Johnson, a former big star at Texas and first-round choice. Here's a description of Johnson from a Chiefs fan posting on Arrowhead Pride: "Maxed out his potential at OLB -- We’ve all been waiting for DJ to "reach his potential". How many times have you, me, and every other Chief’s fan said "THIS is going to be DJ’s break out probowl year". He should have figured that position out by now. It’s time to face facts. He should be in his prime right now. He’s a mediocre OLB. He’s not the game changer we thought he would be." Johnson has since been moved to middle linebacker...something that isn't going to happen here as long as we have Vilma.

It comes down to this: do the Saints need Brian Cushing?

The first question is: where would he play? Certainly not MIKE, because Jonathan Vilma is the heart and soul of the defense. Cushing could play either SAM or WILL, and would displace either Scott Fujita or Scott Shanle. He would be an upgrade over either in terms of speed, but he isn't known as a great pass rusher: "He is a good blitzer, but will not make a name for himself as a sacking outside linebacker in the NFL." [FFToolBox.com]. His strengths--a great combination of speed and strength, quick recognition, proper technique, solid tackling, and good pass coverage, especially against the tight end--dictate using him at the strong-side position. But it is usually Shanle that is considered the weaker of the two incumbent outside linebackers.

What's more, Cushing wouldn't do much to help patch the problems in the secondary, other than perhaps occasionally taking a tight end out of the picture. So the question to be asked is: Does Cushing represent such a significant upgrade over either Shanle or Fujita that the Saints cannot pass him up if he's available? Even more: Is Cushing so much better a football player that the Saints should draft him over a lesser player at a more critical position?

Not many experts think so. A lot of amateur mock drafts have the Saints choosing Cushing, but although many of the professional draftniks have Cushing rated just about at the Saints' slot, most are sticking to the same script and giving us a defensive back--more often than not, Vontae Davis. We'll do him next.

Cushing played running back in high school--so maybe he can double as the power back that Payton salivates for. Talk about versatility.

He's a good Catholic boy, having graduated from Bergen Catholic High in New Jersey. So he ought to fit in quite well in New Orleans--although he should know that our version of Catholicism is perhaps a bit different from his. I doubt he has a St. Expedite medal.