Is There Any Truth to the Tomlinson-to-Saints Rumor?

Share All sharing options for: Is There Any Truth to the Tomlinson-to-Saints Rumor? 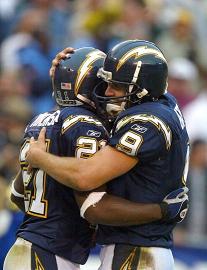 Reunited and it feels so good? (Photo Source)

For the past ten days, the blogosphere has been rife with speculation that LaDainian Tomlinson might leave the San Diego Chargers for a spot on the New Orleans Saints--this despite a total lack of either confirmation or denial on the part of the two teams involved, or Tomlinson himself. Yet the story refuses to die, in part because such a move would make this offseason's blockbuster move so far--the acquisition by Buffalo of Terrell Owens--look like the signing of a backup guard by comparison.

Is there anything to it? We here at the corporate lair of Canal Street Chronicles wish we had a definite answer to that question. Alas, we don't. What we do have, though, is a track record of baseless speculation that is second to none, and a reputation to protect. Therefore, we propose to treat this rumor as though it were legitimate, and examine the circumstances that might lead it to become, in fact, fact.

First, some background: LaDainian Tomlinson is under contract to the San Diego Chargers. That may seem to go without saying, yet a lot of people who cover this story seem to have forgotten what this means: that nothing rests in Tomlinson's hands except his decision not to accept a restructured contract. Tomlinson cannot decide of his own accord to leave the Chargers: he can't quit, he can only be fired.

And he seems to be setting himself up for that. On Friday, March 6, the San Diego Union-Tribune reported that talks had broken off between Tomlinson and the Chargers. The day before, Tomlinson's mother, in a radio interview, had publicly expressed doubts that he would return to San Diego in 2009. Given Chargers GM A.J. Smith's reputation for being a fiscal tightwad and a hardnosed negotiator, it looks as though San Diego has staked out a position and refused to budge from it: Tomlinson can play for them only if he agrees to take less money. Tomlinson, on the other hand, has refused the "offer." That puts the ball squarely in Smith's court--the next move is up to him.

While all this is happening, rumors started with the publication in the National Football Post of an article by Joe Fortenbaugh:

"Sources close to the situation have informed me that the New Orleans Saints are "looking closely" at San Diego Chargers running back LaDainian Tomlinson. The Saints would have a "high level of interest" if the Chargers were unable to come to terms on a new deal with Tomlinson." [Source: National Football Post]

What sources these may be was never explained, of course; they never are. But the rumor refused to go away, despite the fact that it made little sense on several counts:

As it turns out, there is one scenario that could remove all those obstacles: if New Orleans trades for LaDainian Tomlinson by offering a straight-up swap for Reggie Bush.

Can rumors be taken seriously?

In the lead-up to the 2008 season, speculation was rife that the Saints would trade for tight end Jeremy Shockey of the New York Giants. After denials and reports of failed negotiations, that trade never materialized--until, suddenly, it did. The rumors had been right, all along.

This offseason, the major speculation was that the Saints would replace defensive coordinator Gary Gibbs. Even though much of the rumor was based on pure wishful thinking by fans, it turned out to be true as well. Next, the rumor mill took on the matter of Gibbs' successor, and very quickly focused on Gregg Williams. Despite Williams' being wooed by Detroit, Green Bay, Houston, and Tennessee, both professional sportswriters and bloggers tenaciously stuck to the Williams-to-New-Orleans story. It, too, turned out in the end to be true.

The rumors of Deuce McAllister's release turned out to be true, as did the rumors of Jonathan Vilma's desire to return to the Saints--which he did without apparently taking any serious stock of his real market value.

None of this is to suggest that the Tomlinson rumor must therefore also be true; only that its sheer persistence marks it out as having the same sort of quality as earlier rumors that did become fact. It just won't go away. 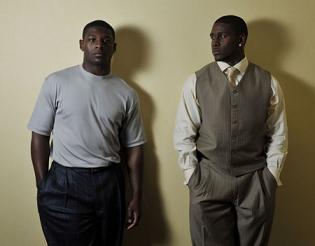 Do the contracts stand in the way?

Reggie Bush signed a six-year, $52.5 million contract in July of 2006. That means he's signed through the 2011 season, as is LaDainian Tomlinson. Reportedly, his base salary this season is $2.6 million, plus a $4 million roster bonus, while his cap figure (which includes bonuses) stands at a hefty $12.1 million. [Source: Rotoworld]

Two years before Bush was drafted, LaDainian Tomlinson signed the richest contract ever for a running back, an eight-year, $60 million deal. His base salary this year is $6.725 million, while his cap charge is $8.791 million. [Source: Rotoworld] What this means, incredibly enough, is that the Saints would actually stand to save over $3 million on their cap by trading Bush for Tomlinson!

What would San Diego gain? To answer that, we have to ask, what do they stand to gain in their current standoff with Tomlinson?

As of January 23, the Saints were $1 million over the salary cap. The Chargers, on the other hand, were $18 million under the cap. It is doubtful that A.J. Smith pursued his strategy of renegotiating Tomlinson's contract purely in order to save money--you don't alienate your best player, and your fan base, unless something happens to make you believe the player, not the position, is seriously overpriced.

What happened was the drop-off in Tomlinson's production in 2009, his advancing age, and his recent history of minor but nagging injuries, plus the emergence of the soon-to-be-franchised Darren Sproles as a viable alternative starter. By all reports, San Diego believes it has already had Tomlinson's best campaigns, and doesn't intend to overpay for a running back who is over the hill. Only a team that believes it can be just as well off without its superstar goes to the extreme of forcing a renegotiated contract on him.

But they face a problem with their fans if they unceremoniously dump the man who has become the face of the franchise (as heartbroken Saints fans can attest to). What they need is another face. Enter Reggie Bush: born in San Diego, educated at Helix High School (along with Alex Smith), and a football god at USC.

Bush has many of the same problems as Tomlinson--the hefty contract, the history of nagging injuries--plus one more: he has never come close to Tomlinson's numbers as a running back. Even though Bush also runs back punts, his total yardage in three years has given him an average of 1,215 a season. Tomlinson's has been 1,945. And he has been remarkably consistent, too: in his last three years, corresponding to Bush's entire career, his average has been 1,936 yards per season.

But the Chargers apparently believe those days are gone. So do a lot of others. On March 2, Greg Cosell published a major piece in the Sporting News in which he claimed that Tomlinson had clearly lost a step. Cosell analyzed the percentage of carries that running backs typically have over 10 yards, and compared Tomlinson's earlier career with last season. His conclusion was that in the 2008 season, "Tomlinson did not have that same look, that shiftiness and "wiggle" that made it appear he was moving at a different speed. This was reflected in that telling statistic of runs of 10-plus yards. Tomlinson only had 17 runs of 10-plus yards in 292 carries. That computes to 6 percent. That's a significant decrease, one that demands close inspection."

If the Chargers believe Tomlinson is used up--and more importantly, if they believe his trade value is used up as well--they may well leap at the chance to get a dynamic, younger player with great potential and huge popularity--even though he has yet to deliver on that potential in his three years in the league. It helps if that player is a local hero. 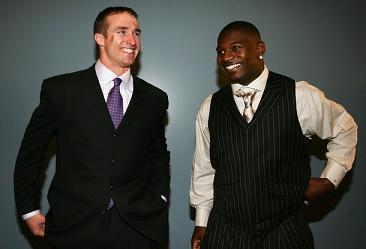 On Sunday, March 8, Saints quarterback Drew Brees made news with an interview he granted to a radio station in San Diego in which he stated that he would love to see Tomlinson in a Saints uniform.

"I’d love to be his teammate again. I think L.T.’s got a lot of great years left in him, so we’ll see what happens." [Source: NFL.com]

In that interview, Brees stated his belief that Tomlinson should not accept a pay cut.

"Look at his track record," Brees said. "Many people could say he had a decline this year, but I disagree with that. He was banged up for the majority of the year, and I think that’s just part of the game at times."

Brees and Tomlinson share the same agent, Tom Condon. It has been pointed out--for instance, here--that given their business relationships with Condon, what Brees had to say comes perilously close to tampering. That would implicate not simply Brees, but the Saints. Yet, apparently, the Saints are doing nothing to rein in Brees--he's made such statements before (but not during the progress of contract negotiations).

What's more, in saying this Brees has seriously dissed his teammate, Reggie Bush. Surely everyone understands that if LaDainian Tomlinson joins a team--any team--there is no starting role left for any other running back. The same would go for Reggie Bush--which is precisely why it makes sense for the Saints to acquire Tomlinson only if they intend to part ways with Bush at the same time. Trading Reggie would also nip in the bud any locker room problem between a star running back and a quarterback who very publicly lobbied for his replacement.

The Silence of the Saints

Through all of this, the Saints have been typically silent. They never divulge much of the inner workings of the team; but on March 5, in an interview with WWL radio, Payton denied the Saints had any interest in either Terrell Owens or Roy Williams. "I'm hearing all this talk about T.O. and I wanted to put a stop to all that business," Payton told Bobby Hebert and Deke Bellavia. Apparently, it was Payton's idea, rather than Hebert's or Bellavia's, to explicitly quash a minor rumor that, frankly, we never heard. Yet he made no mention of the Tomlinson rumor, which has been making national news.

That's not necessarily surprising: both Owens and Williams were free agents at the time, while Tomlinson was still under contract. A coach would naturally be reticent to say anything regarding his interest in a player on another team, especially while that player and team were in the process of negotiating a contract. With this exception: if the coach were to take the opportunity to kill a rumor by expressing no interest. Payton had the opportunity to do so, and didn't. This suggests that the Saints may indeed have some interest in Tomlinson.

It must be admitted that we're not reporting on the Reggie-to-the-Chargers rumor--we're starting it. But we're not asserting that this is something going on behind the scenes; we have no idea what's actually going on. Rather, it would seem to be the only way the Tomlinson-to-the-Saints rumor could actually be true. The Saints can't afford Tomlinson unless they jettison a large contract, such as Reggie's; they can't entice San Diego into a trade unless they make a tempting offer themselves, such as Reggie; they can't work both players into the same offense; and they must find a way to nip any Brees-vs-Reggie feud in the bud. Maybe Reggie and Drew will just get together and laugh it off. Maybe.

Meanwhile, it looks less and less likely that Tomlinson will play for San Diego. And the rumors won't go away.