Drew Brees' Plans for Future Include Going into Business

Share All sharing options for: Drew Brees' Plans for Future Include Going into Business 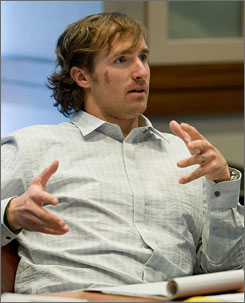 I'd like to know where we're going with the hair. It's football, Drew. Not hockey. (Photo Source)

I know we all hate to even think about it but one day Drew Brees won't be playing for the New Orleans Saints. He won't even be playing football in the NFL. I know, I know. Remind yourself to take deep breaths.

Though we refuse to acknowledge that truth and hope some sort of youth serum is invented before Drew's arm starts to fade, it's a reality that Brees has already started thinking about. Drew is one of 95 NFL players taking advantage of the leagues continuing education classes at top business schools all over the country. He's already attended classes at the Wharton Business School in Pennsylvania and Stanford University.

"We went from 8 a.m. to 7:30 at night," Brees says. "There's a lot of reading, case studies on companies, and then the heads of those companies come in and we discuss the decisions they made and why they made them."

Heh, who knew? That's pretty impressive. Drew tells us where he sees himself in the future.

Brees says he is convinced that whatever business he finds himself in 20 years hence, he will put his imprint on it.

"I absolutely see myself very much hands-on," he says. "I'd have a hard time relinquishing control. I think I would be bored."

I have a desk waiting for you at my store, buddy. Walking distance from your house. E-mail me. Let's talk.

Unless you're gonna need benefits.