This pick and analysis was written by CSC member Hustl504. Thank you very much for your participation! 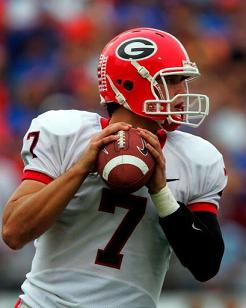 Are those Breath Right strips on his helmet? (Photo Source)

With the twelfth pick in the Canal Street Chronicles community mock draft, the Denver Broncos select...

Stafford falling this far is a dream come true for Broncos head coach Josh McDaniels. With Jay Cutler now out of the picture, McDaniels will be able to develop his own guy to takeover as the Broncos' franchise quarterback. Despite the good haul of draft picks received for Cutler, many Denver fans were distraught over losing the face of their team. Much like Matt Ryan in Atlanta, Stafford has the potential to smooth the current turbulence surrounding the franchise. I expect journeymen Kyle Orton and Chris Simms will fight for the starting spot this season, giving Stafford a chance to acclimatize to the NFL. With Orton's contract expiring after this year, Stafford will be primed to start in 2010. However, I think Stafford has the potential to be named starter in the middle of the 2009 season in an ironically similar manner in which Jay Cutler took over.

I was tempted to go toward defense with Denver's first pick, then taking the leftovers of the Stafford/Sanchez duo with the 18th pick. However, with the Redskins and the Jets both potentially taking a quarterback before the Broncos' next pick, Stafford's value at #12 is too good to pass up. Stafford's arm strength will allow Denver's deadly vertical passing attack to Eddie Royal and Brandon Marshall to continue.While a weak AFC West will allow the Broncos a shot at making the playoffs in 2009, with the plethora of draft picks this year and next, Josh McDaniels is building the franchise toward a Super Bowl run in 2010 or 2011. Drafting Matt Stafford with the 12th pick is the best move McDaniels could make right now, allowing Stafford to develop over the next couple of years into the NFL star he has the potential to be.

The Washington Redskins are now on the clock...