This pick and analysis was written by CSC member natde1016. Thank you very much for your participation! 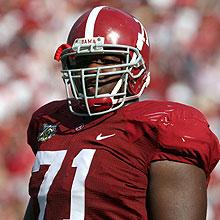 I decided not to use the picture of Smith running at the Combine. (Photo Source)

With the thirteenth pick in the Canal Street Chronicles community mock draft, the Washington Redskins select...

The Redskins have a variety of needs all over the field, and that
makes it incredibly difficult to project what they are going to do
with this pick. There has been speculation that they are concerned
about the progression of Jason Campbell, and this was revealed in a
big way when they publicly pursued a trade for Jay Cutler. They did
not end up making the trade, and the Redskins have stated that, at
least for this season, Jason Campbell is their quarterback. So, while
Mark Sanchez is still on the board at this point, they have other more
pressing needs.

This leaves either the defensive or offensive line. Last year, the
Redskins started off 6-2, and finished the last 8 games of the season
with a 2-6 record, finishing 8-8 overall. While they could certainly
use a good pass-rushing defensive end to compliment and help draw
attention away from the newly signed Albert Haynesworth, their defense
was ranked 4th in the league last year, with an offense ranked 23rd.
Their offensive line is aging, with tackles Jon Jansen (33 years old)
and Chris Samuels (31 years old) both on the decline, and both
somewhat to blame for a passing and running game that struggled as the
season progressed. The Redskins need to find successors for both of
these veterans, and Andre Smith makes the most sense.

Before this years combine, Andre Smith was thought to be a possible
1st overall pick. However, he has showed some maturity issues (was
suspended from the Sugar Bowl for violation of team rules, left the
combine early without telling anybody), and had a sub-par workout at
his pro-day, but despite these issues, he is still a great player, and
definitely worthy of a first round choice. He is widely considered the
best run blocker in the draft, and while his pass protection skills
could use some work, he would not have to jump into a starting role
immediately. He would be best used if drafted and given some time
behind the 9 and 10 year veteran tackles before taking over a starting
role next season. In a division which involves playing against
Demarcus Ware, Justin Tuck, Osi Umenyiora, and Trent Cole twice a
season, offensive line stability and youth should be given the utmost
priority in this years draft.

The New Orleans Saints are now on the clock...