This pick and analysis was written by CSC member Saintsational. Thank you very much for your participation! 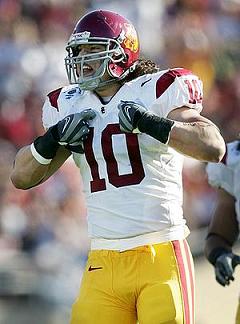 I am being put in a precarious postion here because all of the popular mock draft choices for the Saints are on the board and ripe for the picking. The most popular pick here is no doubt Malcolm Jenkins and local draft expert Mike Detillier would probably call me crazy...

I have no doubt that Ohio State cornerback Malcolm Jenkins is the player they [Saints] really want,

...but I decided to stir the pot a bit here by passing on Jenkins.

My reasoning behind this is simple: the Saints have already significantly upgraged their secondary but what has the team done so far to upgrade the linebacking corp? The return of Dan Morgan has been the only change at the position this off-season and thats just not what I call comforting. There is some young talent on the team already in Jo-Lonn Dunbar and Marvin Mitchell but a first round linebacker would be an immediate upgrade. Anyone thinking the Saints should draft a running back here is smoking the ganja but it ain't Da Chronic.

Now that the decision to draft a linebacker has been made the question, of course, then becomes which one. With Aaron Curry out of the picture it's up for debate as to which linebacker is ranked second best in this years draft. Clay Matthews and Clint Sintim are also on the short list and taken into consideration.

Cushing is a physical specimen with great size. He's got the ideal body one would look for in a linebacker. He also may be a good fit in Gregg Williams' new system because of his aggression, forward mobility and ability to rush the quarterback. Also part of his upside is Cushing's excellent special teams play. He is, however, a little weak in backwards mobility and the coverage game. Sure there are some durability and injury issues with Cushing but given the Saints track record last year, even the healthiest of players stands a good change of landing on the IR.

Feelings will certainly be divided with this choice for the Saints but based purely on their off-season moves thus far a talented outside linebacker would really round out the upgrades made and represent sure improvement at nearly every position on the defensive side of the ball this year.

The Houston Texans are now on the clock...