This pick and analysis was written by CSC member Walter FTW. Thank you very much for your participation! 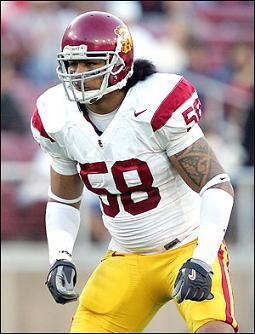 The next Junior Seau? (Photo Source)

While the Chargers also need to address their sieve of a secondary (and O-line), their lack of a pass rush was clearly the problem, not the skill of the corners involved (Thorpe award winner Antoine Cason, the Chargers' first-round pick of last year's draft, shows considerable promise as well as their proven starters). Losing Shawne Merriman probably cost the Chargers a run at the Super Bowl this year, and revealed the deciencies in their linebacking corps.

Speaking of deficiencies, starting inside linebacker Matt Wilhelm was exposed as one of the worst starting defenders in the NFL, equally unable to cover, tackle, blitz inside, or call plays. Rey Maualuga on the other hand, winner of the Chuck Bednarik award for best defender in college football last year, can do all of those things equally well. He's an extremely underrated cover man, possessing great range and instincts when rotating zones. He's probably the surest tackler in the draft besides Aaron Curry. As Juice Williams could tell you, he's an outstanding blitzer on the inside (a huge deficiency for the Chargers last year) and hits so hard he can knock the toenails off of people. Finally, while he was at USC he played in a very similar 3-4 system to the one Ron Rivera runs at San Diego, and could immediately contribute a la Lofa Tatupu as a zone-blitz linebacker.

There's plenty of discussion about finding another consistent running back to be an understudy to LDT (Knowshon Moreno, specifically) but if you guys don't know how I feel about the halfback position by now, it's that no halfback (besides Barry Sanders, the best ever) transcends a bad o-line. San Diego needs to address their interior o-line to pull for LDT, and there's no guard or center who's worth a first-round pick in this draft. San Diego, like Seattle and New Orleans, was a team plagued by injuries, and as a result was really better than their record; they have few weaknesses, and Rey Maualuga is the safest pick to fix their biggest one.

The NY Jets are now on the clock...