This pick and analysis was written by CSC member SaintsDynasty. Thank you very much for your participation and for filling in on the spot! 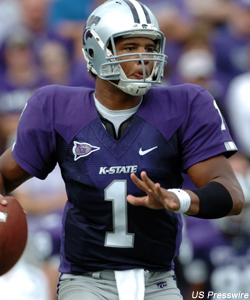 Freeman will be charged with saving a franchise. (Photo Source)

With the twentieth pick in the Canal Street Chronicles community mock draft, the Detroit Lions select...

Having selected the best pass protector in the draft to watch the blindside at #1 the Lions look to add a top talent at quarterback and do just that by selecting Freeman. With a new head coach and GM, the Lions want a face of their franchise and Freeman can bring just that. Freeman brings the ability to make all the throws and can put some mustard on the ball. While prone to some poor decisions at times, he can make plays with his legs and open things up down field by extending the play; last year alone he scored 14 rushing TD's to go along with 400+ yards. Furthermore, had 20 TD's only to 8 INT's, showing he is improving on previous totals and fixing the inconsistencies that plagued him the first two years of his college career.

Additionally, with QB's such as Culpepper still on the roster he will have some time to become acquainted with the new system in Detroit and work on correcting some of the small mistakes that are in his game. Overall, the Lions are ecstatic to see the Bucs pass on Freeman and are excited to see what he can do in the NFL.

The Philadelphia Eagles are now on the clock...