This pick and analysis was written by CSC member MtnExile. Thank you very much for your participation! 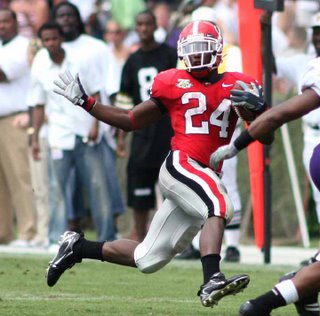 With the twenty-first pick in the Canal Street Chronicles community mock draft, the Philadelphia Eagles select...

Er, make that Knowshon Moreno, RB, Georgia. But what they're really doing is re-loading the Westbrook missile launcher.

With the trade for Jason Peters, Philadelphia's offensive line problems appear solved. That leaves Andy Reid in the position of drafting the best available player, and at this spot that player is Moreno. Some would contend that Andy Reid never takes a running back in the first round; but they're only saying that because he never has. And Moreno being available here is just too good to pass up. It's uncanny how much alike Moreno and Westbrook are. They are virtually the same size; Westbrook is just a tad faster in a straight-line race; but both play fast, and both are stronger than you expect them to be. Both play with a non-stop intensity; both are excellent between the tackles and equally excellent catching the ball on screens and in the flats. Moreno could slip into the Eagles' offense seamlessly on the first day--and that's precisely why they choose him here.

Philadelphia is a good team that contends every year, but they do have holes. Their receivers--with the exception of budding star DeSean Jackson--are nondescript, and many mocks have them taking someone like Kenny Britt in this spot--a plausible choice, especially considering that if Moreno is Westbrook, and the Eagles already have Westbrook, they have no need for Moreno.

But the passing game really isn't Philadelphia's problem: the running game is. With receivers like Jason Avant and Kevin Curtisplaying opposite Jackson, they were still able to barely miss being a top-5 passing offense in 2008, with nearly 4,000 yards. The rushing game, though, was anemic: Philadelphia was only 6 yards per game better than the Saints, coming in 22nd in the league. The resemblance to the Saints doesn't stop there: the fans, too, sound like Saints fans when they talk about the offensive imbalance. It's hard to have a top rushing game even when you have a top rusher, if your pass-to-run ratio is nearly 2-1. But it's also hard to give your ace more carries when he's always dinged up. And Westbrook is always dinged up.

Moreno isn't. He comes out of Georgia healthy, and with something of a reputation as an iron man. With two Westbrooks (or two Morenos?), Philadelphia doesn't have to change a thing in their offensive philosophy. Andy Reid can continue calling the short dumpoffs he loves so well, knowing that with two backs he can wear down any opposing defenses--something that Westbrook alone isn't as good at as he used to be.

The Minnesota Vikings are now on the clock...