This pick and analysis was written by CSC member MobileSaint. Thank you very much for your participation!

With the fourth pick in the Canal Street Chronicles community mock draft, the Seattle Seahawks select...

This is a rare opportunity for the Seahawks to draft so high as they have not had a pick this high since 1997, when they took Shawn Springs (3rd) and Walter Jones (6th). Jones, the franchise left tackle, is 35 and six months older than uber-left tackle Jonathan Ogden, who retired from the Ravens prior to last season. The run game did not turn any heads last year and the offensive line gave up 36 sacks last season. More importantly, the Seahawks average time of possession was 26:37, nearly seven minutes shorter than that of their opponents. 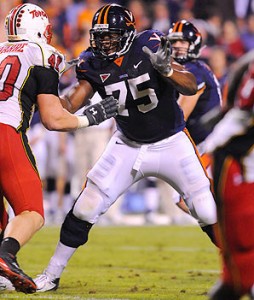 In addition to having a high-character reputation, Monroe is a rare and ascending talent. Remember Brandon Albert, the 6'7", 315-pound 15th pick in the draft by the Chiefs last year who started 15 games in 2008 at left tackle? Eugene Monroe is the reason Brandon Albert played guard in college.

At 6'6", 315 pounds, there is no reason to think Monroe cannot succeed Jones in manning the blind side in another season or two. Monroe can hold down a starting job at the right tackle position in the meantime as an upgrade over tackle/guard Ray Willis. The Seahawks may not have a chance to pick high enough to draft an elite left tackle anytime soon, so this is the time to get one.

It is worth noting that the Seattle faithful are unhappy with the Rams selection of Michael Crabtree, who the Seahawks could have paired with free agent signee TJHoushmandzadeh. Amazingly, the Seahawks had only 3 wide receivers who caught more than nine (9) passes last year: Bobby Engram (47), who left in free agency; KorenRobinson (31), who is never too far from his next suspension; and Deion Branch (30), who is never too far from the next injury report. Maybe the Seahawks can capture some magic from one-time Saint WR Mike Hass, who is on their current roster. The window for Matt Hasselbeck is closing rapidly, nearly enough for Seattle to strongly consider taking Matthew Stafford. But Seattle is not ready to cut the cord with the veteran and proven Hasselbeck in favor of a rookie QB hoping that Matt Ryan II will emerge, at least not this year. That Stafford is still available would prompt some interesting trade possibilities with teams that do need a quarterback: San Francisco, New York Jets, and even Denverdepending on the Jay Cutler situation.

Despite Monroe's natural talent, this pick can be viewed by some as one made by process of elimination as other positions of need for Seattle (Free Safety, Running Back, Wide Receiver) make no sense this early and can likely be addressed when Seattle picks early in the second round. There is no Michael Crabtree available, and there are no safeties or running backs in 2009 who would justify a No. 4 selection. Quality players can be found for these positions in later rounds as Seattle has its full complement of picks in 2009. Seattle took a defensive end in the first round last year, and are not ready to revisit the D-line again.

This is a team in a relatively weak division that sees itself as able to win the division now and get into the playoffs now. To do that, it needs the line to protect Hasselbeck, who suffered his first injury-plagued year last year, so that he can deliver against some less-than-stout defensive teams in the division in Arizona, St. Louis, and San Francisco. Monroe can play a key role in pass protection.

The Cleveland Browns are now on the clock...