This pick and analysis was written by CSC member and SB Nation blogger Dave the Falconer, from The Falcoholic. Thank you, once again, for your participation! 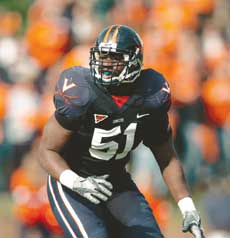 With the twenty-fourth pick in the Canal Street Chronicles community mock draft, the Atlanta Falcons select...

Nothing that has happened over the last couple of months has changed my belief that Sintim is the best fit for the Falcons at 24. Having lost two starting outside linebackers in free agency and in desperate need of an upgraded pass rush, the team could do a lot worse at this spot than a guy who can start at outside linebacker in his first year and gets to the quarterback with the best of them.

Most importantly, though, is that Sintim has the potential to be a complete player. Average combine numbers aside, he clearly possesses the football intelligence and athleticism to be an asset in coverage and against the run. He already tackles well--a must for the ranting lunatic who runs SBN's Falcons blog--and he'd be a fantastic complement to second-year middle linebacker Curtis Lofton, who already looks like a budding star. The Dirty Birds have made their living off of strong linebacker play for years now, and I see no reason that should stop now. Sintim is the pick, and if we're lucky he and Drew Brees will get to know eachother very well next year.

The Miami Dolphins are now on the clock...