This pick and analysis was written by CSC member jful. Thank you for your participation! 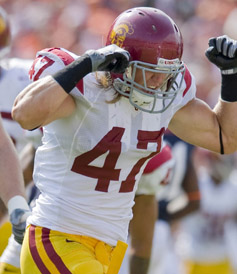 With the twenty-fifth pick in the Canal Street Chronicles community mock draft, the Miami Dolphins select...

While Dolphins fans are clamoring for both a wide receiver and a cornerback in the first round, Bill Parcells is happy to have Clay Matthews fall to him. Hakeem Nicks is a definite possibility, but I don’t think the Dolphins want to invest so heavily so soon after taking underachiever Ted Ginn Jr. Additionally, while their receiving corps is nothing spectacular (although Greg Camarillo is a poor man’s Lance Moore!), the more glaring need is an upgrade on the defensive front – especially with the new divisional offensive threat in Terrell Owens, as well as the return of Tom Brady.

The departure of Andre Goodman created a void across from Will Allen, and the signing of Eric Green helps that, but a cornerback is a definite possibility here. Vontae Davis’s “character concerns” along with his reputation of poor work ethic unquestionably eliminate him from Parcells’s draft board, and Darius Butler (popular in other mocks) seems like a bit of a reach. Furthermore, the Dolphins have been working out several late round CB prospects, including University of Miami cornerback Bruce Johnson, which reduces the first-round urgency of a defensive back.

The other and maybe more important area for improvement is a pass rusher—Joey Porter has never played as well as he claims he is, and his age really began to show as the season progressed—and though there are rumors floating around there on the internets that Jason Taylor may be on his way back to Miami, the Dolphins really lack a dynamic pass rusher. Matthews fills that needs, provides defensive flexibility, and possesses tremendous upside.

He’s overshadowed by the other two USC linebackers taken in the first round, but Matthews is a very solid player. He’s an excellent pass rusher with great speed (he ran a 4.57 at his pro day), and all the scouts say he plays at an extremely high level (“he’s got a non-stop motor,” “flies around the field, sideline-to-sideline,” etc.). More importantly, he’s exactly the kind of player Bill Parcells looks for—he’s an extremely hard worker, an overachiever (was a walk-on at USC), and he has great football genes (both his dad and grandfather were pros, and several other relatives were successful football players). His intelligence on the field makes him very versatile, and the Dolphins would probably like to use him like USC did in various positions. The knock on him is his lack of experience, but Parcells is likely to take a chance with a player he believes will be successful. Matthews possesses both the physical tools and the IQ to do so.

The Baltimore Ravens are now on the clock...