This pick and analysis was written by CSC member Satchmo26. Thank you for your participation! 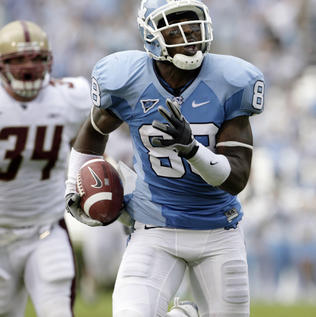 With the twenty-fifth pick in the Canal Street Chronicles community mock draft, the Baltimore Ravens select...

The Ravens could use an injection of young talent at WR, CB, and LB, so this was a tough choice until I noticed Hakeem Nicks was still on the board. With Vontae Davis still available, I was tempted to go CB, but their need for a play-making receiving threat to couple with second-year QB-gunner Joe Flacco seemed most pressing. GM Ozzie Newsome reportedly has WR high on his radar and it makes sense that he would because Flacco's main targets last season were the thirty-five-year-old Derrick Mason and the inconsistent and often injured Mark Clayton.

Nicks isn't the quickest and most explosive receiver in this year's draft class (ran a 4.51 through the 40 yard dash), but his instincts with the ball combined with his excellent strength and super-sticky hands more than make up for any shortcomings at speed. He's been viewed as similar to Anquan Boldin and, based on what I've read, he reminds me of our own main man Marques Colston. While playing for the Tar Heels in 2008, he made 68 receptions for 1,222 yards and 12 TDs and led the ACC with an average of 94 receiving yards per game. In his three seasons there, he set 14 school records, including career receptions (181), career receiving yards (2,580) and career touchdowns (21). NFL.com gives this positive-leaning analysis of him:

Positives: Passes the eyeball test. Good initial quickness off the snap. Good strength and lateral agility to fight through press coverage. Sneaky downfield speed. Good burst out of his breaks to generate separation, especially on slants. Rare body control for a player of his size. Can contort his body in space to make the spectacular reception. Sticky hands. Can snatch out of the air or absorb with his body when he feels an impending big hit. Knows where the sidelines, down markers and, most important, end zone are. Good height and leaping ability for the fade. Rare strength, balance and agility to turn short and intermediate catches into long gains. Good vision to cut back against the grain. Improved with each year of experience. Might just be scratching the surface of his potential.

Negatives: Questionable deep speed. May lack the top-end speed to challenge defensive backs over the top, allowing savvy NFL defenders to close off the crossing routes on which Nicks generated much of his success. One of three legitimate NFL-caliber receivers for the Tar Heels, and capitalized on defenses spread thin.

In addition to a previous visit to the Ravens training complex, the Tar Heel Times reported last week that the Ravens were sending quarterback Joe Flacco and director of player personnel Eric DeCosta to the University of North Carolina this past Friday to give Nicks a private workout. No news yet on how that went. After Nicks put on 14 lbs. (reportedly in fat, not muscle) between the Combine and his Pro Day, there's been concern over his conditioning and motivation. He was nursing a strained hammy during that time, so I think the added weight was only a temporary setback. He doesn't have enough of an injury history to raise any alarms as he only missed one and a half games in his three years at UNC. If Flacco and De Costa saw enough good things last Friday to put any fears to rest and if he is still available at #26, me thinks the Ravens will make Nicks their guy in round one.

The Indianapolis Colts are now on the clock...