This pick and analysis was written by CSC member MtnExile. Thank you for your participation! 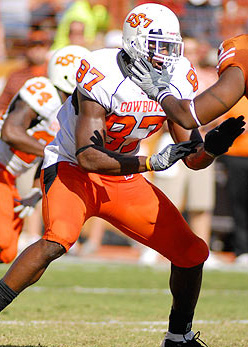 He can block too. (Photo Source)

With the twenty-eighth pick in the Canal Street Chronicles community mock draft, the Buffalo Bills select...

The trade that sent Jason Peters to Philadelphia sent shock waves through the NFL draft. Okay, it sent shock waves through the Canal Street Chronicles Mock Draft. Okay, okay, it sent shock waves through MY PICKS in the mock draft. Philadelphia needed a top-notch tackle in this draft; now Buffalo does, so you'd think I'd be in the same situation with this pick. Especially considering that the problem remains: all the best tackles are already taken. Should the Bills use this pick on the best one still available, which would probably be William Beatty? Maybe...but I doubt it. Beatty isn't that much better than other prospects rated as second- or even third-round picks. In fact, NFL Draft Scout compared him to Demetrius Bell--Buffalo's 2008 seventh-rounder who wasn't active for a single game last year. Would you spend a first rounder on a clone of last year's last choice?

Probably, the Bills' earlier pick of Aaron Maybin was rendered obsolete by this trade...but it's too late to do anything about it now. Almost certainly the Bills will snap up one of the better offensive tackles--in our own mock, Eben Britton was still available at #11. (Andre Smith was available as well--though I wouldn't recommend him to anyone because he's got the highest bust potential since Vernon Gholston.) In real life, some other tackle, such as Michael Oher, might also be available, and would be too great a temptation to pass up.

But not now. The available tackles are just not good enough. The Bills can pick up good interior linemen in later rounds. That leaves the best player available at a position of serious need: Brandon Pettigrew. When your tight ends are Derek Schoumann (15 receptions for 153 yards), Derek Fine (10 receptions for 94 yards), and Jonathan Stupar (pardon?), snapping up Pettigrew is a no-brainer.

"On the field, there is little Pettigrew can't do, and he displays excellent physical tools and toughness." [Sporting News]

"Prototypical size at 6-5, 265, with impressive strength on his frame ... Reliable target who rarely drops passes ... Nice understanding of feeling soft spots in coverage ... Has solid speed and makes things happen after the catch ... Very good blocker who puts a lot of effort into this area ... Uses his hands well in pass protection and run blocking ... Can beat the jam and is physical on the line of scrimmage ... Displays good athleticism on jump balls ... Great overall skill set." [Walter Football]

"Pettigrew is a solid all around tight end. He is a rare TE prospect that can be a factor as a receiver and a blocker. He has excellent size and uses it very well on the field. Pettigrew is a very good intermediate receiver and knows how to get open underneath and will catch anything thrown his way. His athleticism and natural strength make him a load to bring down once he has the ball in his hands. He also shows the willingness to block, and uses his size and strength to help out when he is not running routes." [Football's Future]

The biggest knock on Pettigrew is his arrest on felony charges of assault on a police officer during his junior season. Allow me to be cynical for a moment: people who actually beat on police officers are not invited to plead down to misdemeanors, which is exactly what happened in Pettigrew's case. They are, rather, permitted to recover as long-term guests of the state. Pettigrew allegedly elbowed an officer in the chest during a drunken altercation at a party. I wasn't there; I don't know; but most likely he bumped an officer during a sweep and they bombed him with as many counts as they could come up with. Happens all the time, and not enough to make anyone with any experience think that Pettigrew is an immature malcontent or an uncoachable team cancer.

Thus, the man, the team, and the need come together. Brandon Pettigrew + Buffalo Bills: it's a beautiful thing.

The New York Giants are now on the clock...