Share All sharing options for: With the 116th Pick in the 2009 NFL Draft the Saints Select S Chip Vaughn 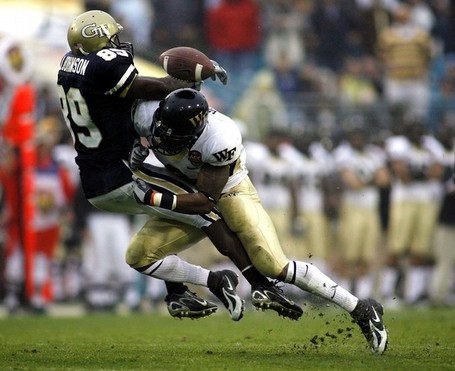 Here is some linkage for you guys:

Positives: Looks the part. ... Rare size and upper-body development for the position. ... Aggressive defender that attacks in run support. ... Reliable open-field tackler. ... Heavy hitter that can separate the ballcarrier from the ball, resulting in forced fumbles and passes broken up. ... Appears to have at least adequate straight-line speed, good balance and a low backpedal. ... Good leaping ability to battle for the ball. ... Has developed a reputation for game-changing plays over his career. ... Came to Wake Forest as a wide receiver and is still an ascending player.


Negatives: Better in run support than against the pass. ... Questionable instincts. ... A step slow in recognizing the action and has a hitch in his turn. ... May lack the agility to mirror routes. ... Better facing the quarterback. ... Loses track of the ball and has only marginal hand-eye coordination for the interception. ... Surrounded by a great deal of talent at Wake Forest.

Notes:
First name is "Clarence"...Actually arrived at Wake Forest as a wide receiver...Saw extensive action as a backup early in his career before taking over a starting job in 2007...Led the Demon Deacons in tackles as a junior...A blue-collar prospect who certainly isn't flashy but has adequate physical tools and even better intangibles...An in-the-box run supporter whose best fit at the next level will be as a strong safety.