Share All sharing options for: With the 164th Pick in the 2009 NFL Draft the New Orleans Saints Select P Thomas Morstead 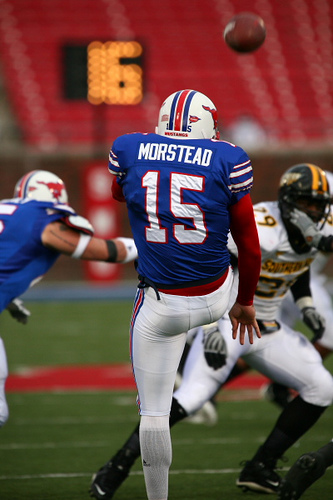 What the $*%^#!?!?! With only four picks in this years draft I think we had a feeling that the Saints would make some draft day moves to gain another pick or two. After trading with the Eagles to gain a pick in the fifth round of the draft the Saints used that pick to select...wait for it...a punter! The Saints have selected punter Thomas Morstead out of Southern Methodist.

This one is really out of left field. We now know that the Saints really wanted RB Chris Wells yesterday so when they announced that the Saints had made a trade to get into the fifth round, I thought for sure they would use that pick to grab Liberty running back Rashad Jennings who was still on the board. Alas, they decided to take it in a different direction and keep us all on our toes. If you thought drafting Taylor Mehlhaff was a bad idea, you probably aren't too happy about the Saints latest draft day decision.

Certainly this means the team does not have complete faith in current punter Glenn Pakulak. Still...a fifth round pick? The Saints were doing well up until now.

Here is your linkage:

Weaknesses:
Didn't face a lot of pressure situations...Leg is so strong he'll out-kick his coverage at times...Has some work to do when it comes to kickoffs.

Notes:
Career average is the fourth best in school history...Connected on 37 of 53 field goal attempts (70%) and went 106 for 108 on extra points for the Mustangs...Named 2nd Team All-Conference USA in 2006 and 1st Team in 2007...Led Conference USA and ranked 9th in the nation with a 44.6-yard average as a junior...Very good prospect who played his entire college career in relative obscurity...Has the physical tools and superb intangibles to be drafted and earn a starting job in the NFL.


Negatives: Does not turn the ball over enough in his full-length punts. ... Has not been a kickoff specialist, but may be tried there due to his leg strength. ... Must prove himself as a holder if not used as a kicker. ... Missed three kicks inside of 40 yards in 2008, four in both 2006 and 2007.