This pick and analysis was written by CSC member Sean McG. Thank you very much for your participation! 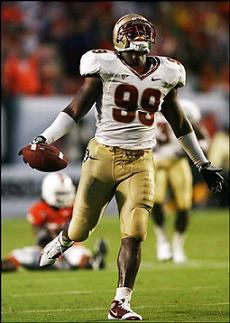 I believe I can fly! (Photo Source)

The Packers,, under new Defensive Coordinator Dom Capers, have decided they would be switching to the 3-4 defense this season. There is definitely some talent in the front seven, like Aaron Kampman, Nick Barnett and AJ Hawk, but with the Packers announcement that Kampman will be playing Outside Linebacker with the new scheme, these 3 are all linebackers. The ideal choice at this pick would have been BJ Raji to anchor the defense, but he is long gone. Guys like Brian Orakpo and Malcolm Jenkins were also considered. Orakpo is obviously already gone, and Jenkins' questions about possibly making a move to safety concerned the Packers, as they need a surefire corner, not safety. Another intriguing pick was Aaron Maybin, who is very much like Brown, a versatile DE/LB who is a great pass rusher and could bring more sacks to this defense, but Maybin is often cited as a one year wonder, which is a big question mark for a team that really needs to bring someone to the front 7 that will be a big difference maker.

But Green Bay decided to go with Everette Brown, the quick, versatile Defensive End from Florida State. After Brian Orakpo, the Packers felt Brown was the next best pass rusher in the draft, and could severely help a defense that registered only 27 total sacks last year. This defense could really use Brown's pass rush ability as well as his ability to play DE or LB in a 3-4 scheme. Brown posted somewhat impressive combine numbers, but his game film and the way he improved year after year at Florida State is what really made scouts take a closer look. Brown has explosive burst off of the line, and despite his smaller frame for a DE, uses smarts and athleticism to get by defenders. He also has quick feet, and great closing speed. Brown has question marks about his ability to be a 4-3 end in the NFL, but that will not be a problem for the Packers, who are now using a 3-4.

The San Francisco 49ers are now on the clock...