This pick and analysis was written by CSC member Steve the fan. Thank you very much for your participation! 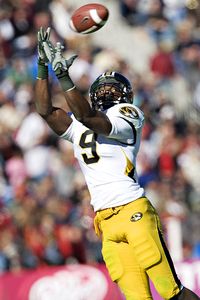 Maclin looks it in. (Photo Source)

The signing of T Marvel Smith removed tackle from the 49ers draft needs shift its needs to WR, OLB, and QB. There is a need for a pass rushing OLB, but the better players are taken and Aaron Maybin has too many questions. At QB Mark Sanchez and Matt Stafford are still on the board, however, the 49ers already have a battle brewing between Shaun Hill and Alex Smith. So, I think they will pass on a QB. The 49ers lack playmakers at the WR spot and will take Jeremy Maclin with the tenth pick. At Missouri he lined up in different offensive positions to force opposing defenses to account for him. He also served as the kick and punt return man for the Tigers and was an explosive force racking up yards. Maclin is a dynamic playmaker and I am suprised he has dropped to tenth.

Jeremy Maclin is 6-1, 200 lbs and has a college career line of 182 receptions for 2,315 yards with 22 touchdowns. His strengths are his elite speed, good body control and coordination, good hands, elusive running style, and his ability as a great return man. His weaknesses to contrast are unpolished route running, lack of ideal strength, concentration lapses, and Missouri's spread style offense inflating numbers.

The Buffalo Bills are now on the clock...