This pick and analysis was written by CSC member BlackandGold4ever. Thank you very much for your participation! 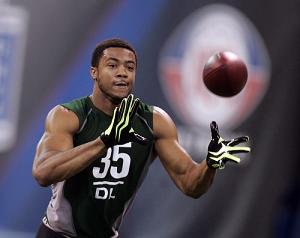 With the eleventh pick in the Canal Street Chronicles community mock draft, the Buffalo Bills select...

There were only four teams with fewer sacks than the Bills last season, so they need an elite pass rushing DE. They also have needs at OG, TE, and LB, but there is a lot more depth at those positions this year that thy can afford to select players at each of them in later rounds. Everette Brown would the top DE on the draft board, but the Packers stymied those plans. While Maybin does have limited experience, he has made the most of his playing time. He had 12 sacks, 20 tackles for loss, three forced fumbles, and three pass breakups last season. He brought his 40 time down to 4.59 on his pro day (it was 4.78 at the combine). He is extemely quick, has a good first step, and great burst. He has a nonstop motor, closes well on the QB, and even handles himself well in coverage. He is a bit smallish for DE, doesn't have a history of great 40 times, and struggles some against the run, struggling to shed blockers. He also still needs work on his instincts, but that can be overcome with experience.
The Bills could also move Jason Peters before draft day and pick up an OT here. I can't see what makes him think he'll be the highest paid LT when he gave up 11.5 sacks in 13 games. It would also not be a huge surprise if they traded down and tried to get Pettigrew at TE and Michael Johnson at DE. Johnson could turn out to be another Mario Williams if coached properly...he is definitely a freakish athlete.

The Denver Broncos are now on the clock...