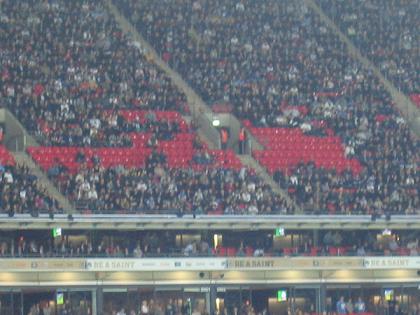 Blocks of unused seats at the International Series game in Wembley Stadium.

Just ran across this article in the UK's Telegraph and thought it was worth sharing.

Apparently the NFL really is hellbent on expanding football into Britain. On top of the once-a-year regular season game the NFL has been scheduling at London's Wembley Stadium since 2007, the league is now commited to awarding the city a Super Bowl as early as 2014.

Representatives from the Mayor of London's office and Visit London, the city's official visitor organisation, has received assurances from the NFL that, after two sell-out regular-season games at Wembley Stadium and a third scheduled for Oct 25, there is a commitment to bring the championship game to the capital in 2014.

The Saints, of course, were the victors in last years International Series game over the Chargers. Both teams gave the British crowd exactly what the league wanted - a high-scoring, nail-biting game - and based largely on the success of that game, and the Giants/Dolphins game the year prior, the NFL has decided that a Super Bowl in London would be deserved.

So much so that the league is even willing to bend the rules a bit...

...the NFL is also understood to be prepared to change their standard bidding procedures to London's advantage, guaranteeing the Super Bowl to Wembley for a particular year. Normally contestant host cities fight at least a three-way battle before a final decision is made

Well isn't that nice of them?

CSC's Take: There are enough international events taking place in the UK in the upcoming years to help boost their economy and prove their global dominance.

...officials in London are similarly intent on securing hosting rights soon after the 2012 Olympics and before 2018, when England could host the World Cup – thus completing an unprecedented sporting trilogy for the city and the country.

First taxation without representation and now this! Being a bit greedy, aren't we London?

Nothing is anywhere close to being official, of course, but I don't like the idea. The Super Bowl, and all of the hoopla surrounding it, is big business for the cities that host it. We know how much an event like the Super Bowl would mean to a city like New Orleans, which is fervently trying to secure a bid itself, and I would hate to see it be outsourced to international turf instead. One game a year is fine and dandy with me but the UK has not shown enough interest, in my opinion, to warrant or deserve one of America's all-time great events.