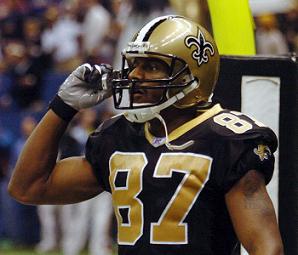 Before we move on and start discussing the all-time great defensive ends who've worn the black and gold, let's acknowledge the first member elected to CSC's All-Time Saints Team, wide receiver Joe Horn. "Hollywood" surprisingly edged out Eric Martin in the voting this weekend but Martin lovers will still have a chance to elect him in the near future for that second receiver spot.

We're going to switch gears now and change over to the defensive side of the ball. It's time to start talking about the greatest defensive ends to ever play for the Saints.

Below is a list of players I've researched and deemed worthy of inclusion in our discussion of great Saints defensive ends. Stats for this position are scarce so decisions will inevitably come down to more than just numbers. One of two of these players, Jim Wilks in particular, were versatile and also played significant time as a tackle. They will also be included for consideration when we get to the tackle position for our all-time team.

The poll will open at 6am Central tomorrow morning and will be open for exactly 48 hours, ending on Friday, June 5tth. Remember again that we will hold a separate election for the second defensive end position.

I now open it up for discussion. If there are any other nominations or players that you just can't believe I missed, let it be known in the comment section. I would also love to hear some personal rumination from our readers who've actually watched these guys plays.

Notables: Elected into Pro Football Hall of Fame in 1982.

Notables:Fifth most career sacks (50.5) with Saints.