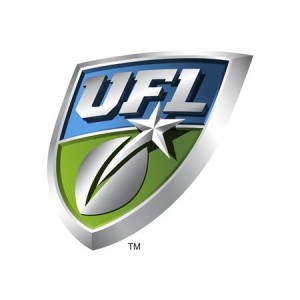 Team logos still have not been revealed. (Photo Source)

The inaugural season of the United Football League is quietly coming together. So quietly, in fact, that I didn't even know they had just recently held their first draft this past week until another SB Nation writer alerted me to it. If you're not familiar with the UFL, you can learn all the necessary basics by reading my original post from February. For a little background on the recent draft, I'll let the leagues official website speak for itself.

Tonight the UFL held its inaugural "Premiere" Season Draft. Selections were made from players who participated in the League's recent workouts in Orlando and Las Vegas along with other available prospects. Each franchise selected 24 players and now owns the rights to those players if they choose to play in the United Football League. The UFL has already begun contacting the players listed below and expects to announce signings over the next few weeks. This list may be subject to change based on further player evaluations or additional player availability.

The remaining openings on each team's roster will be partially filled in July with players who coaches had previously identified and "reserved". The last invites for the 60-man opening camp rosters will go to players who have been released by the NFL during training camp; with divisional/regional preferences assigned to each of the inaugural four franchises.

What was interesting was that a quick perusal of each teams roster revealed a few names of players you may or may not remember from recent Saints history. They include:

Most notable of all, however, will be the return of Jim Haslett to a full-time head coaching position. The former Saints skipper will be the man in charge of the Orlando...(names TBD). If you're a Haslett fan, you'll want to start paying attention come October when the league kicks off.

I asked for your opinions on the matter the first time we discussed the UFL but now that more pieces of the puzzle have come together, has it change your mind? Are you surprised that the league has attracted coaches the likes of Haslett, Jim Fassel and Dennis Green? Does the list of players surprise you? There are so many things to discuss regarding this new enterprise so feel free to opine from any angle you'd like.