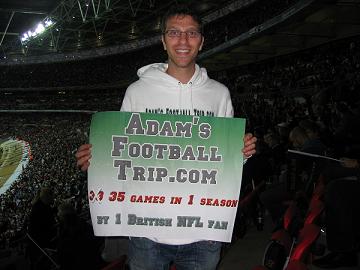 While NFL players around the country begin to gear up for another football season this year, there is one NFL fan who is getting himself prepared for the upcoming months as well. Adam, everyones favorite football-loving Brit is crossing an ocean, taking to the road yet again and embarking on another amazing football trip in 2009. Adam emailed me not too long ago and alerted me of his plans. After overcoming the initial shock and disbelief of another Adam trip, I realized I had to get more details.

If you're a relatively new reader of Da Chronic than you probably weren't here when we first learned of Adam and his record-breaking road trip that saw him attend forty games last season, at least one at every stadium. Since then, Adam and I have become fast friends, inviting each other to Saints games in our respective cities; he in London and me, of course, in New Orleans. You can keep tabs on "The Tailgate Knight" during his trip this year by checking out his blog of the same name.

Make the jump for my Q&A with Adam to learn about his latest escapade and what he's been doing in the off-season since his last trip. Many thanks to him for taking the time to answer my questions. We'll follow along with Adam this year as he makes his way across our great country.

CSC: Are you going through football withdrawl?

Adam: Isn't everyone? There is only so much titilation one can get from watching the NFL's top ten "whatever".

CSC: Have you gotten a job, you lazy bum?

Adam: I went back to teaching drama with my youth project but that is only part-time. So I have been doing that whilst trying to write the book about last year and find a publisher.

CSC: What is happening with your book about your last trip? I go to Barnes & Nobles every Sunday and ask the clerk if it's arrived yet and every week she sadly tells me, "No." I'm waiting.

Adam: Yeah, I'm waiting too. Well, it is pretty much finished. It took a lot longer to write than I thought, as I had simply so much material. However the recession is not helping and publishers want already published writiers. I still have faith that many people in the U.S and U.K will want to read the book so I'm still trying to get it out there.

CSC: Have you recovered fully from the financial burden of your last trip?

Adam: Nope, not at all. Despite going back to part-time work I still have some credit card debt to take care of. However my following trip will not be nearly as expensive as last years.

CSC: Your Facebook profile says you are still dating your way-hotter-than-you girlfriend, Stephanie. Let me ask you...what the hell does she see in you?

Adam: [laughs] Yes, she is hot. You will have to ask her what she sees in me. Last week, we were at a bar in London and a Packers fan walked in with a Favre jersey on. Without prompting her, she gave him some smack talk about Favre and the Packers and how the mighty Bears beat them at the end of last season, etc. So I think she is a secret NFL fan.

CSC: So you're doing it all over yet again. What the hell is wrong with you? What is driving this ridiculous passion?

Adam: Well, not quite. I will only be doing about 24 games and then hopefully the Superbowl. This trip will be more focused on the tailgating as oppossed to getting to as many games as physically possible. I was asked to join Jay the Tailgate Guy and his team from YourTailgateParty.com, where we will be living in a converted American school bus driving to each tailgate. My parents felt that I had already "done" my football trip and as a writer, was there anything else to learn by doing it again? To be honest, I was about ninety-percent happy with my trip last year. There were things I missed out on or I was late for the tailgates at some games. This project will help me discover the few bits that I missed and more importantly explore the impact and culture of the college games and tailgate. I am doing eight college games this year. Steph is also excited about this years trip. She will be coming out for seven weeks as opposed to last year when she only came out for four. I also aim to add a splash of British delicacy to the American tailgating tastebuds.

CSC: How are you affording this latest venture?

Adam: This trip is a lot cheaper than last year because I will be living on Jay's tailgate bus. I just have to find money for my flights over there and some money for food and tickets.

CSC: How will this trip be better?

Adam: I don't know if it will be better or worse. If I had another fourty thousand dollars I would do a few things differently than last year and I could probably go to around sixty games per season, including college and high school and lots of flights. However, to join Jay and his team is an honor. This project is much more of a joint effort. Last season was about me and my goals and now this is about quality over quantity. With less games there is less travel time and I will be able to spend longer with fans at the tailgate. This trip has different goals. However my personal goal is still to get more people into the sport.

CSC: Are you coming back to New Orleans?

Adam: Certainly am! I will be there in week 16 for your mighty matchup with the Dallas Cowboys! Can't wait!

CSC: So I guess I have to take you to the game? It's gonna be a good one.

Adam: That would be lovely! Thank you very much!

CSC: Will you be going to the International Series game at Wembley again this season?

Adam: Yes, I will be. Last season I didn't get to see Tom Brady play so hopefully he will be fit and the Bucs will be a little better too. Are you coming over for that one?

CSC: I am going to have to pass on the London game this year. Is Stephanie coming with you on this trip?

Adam: We will be flying to the states together after the London game. Her first game with me will be at the new Dallas Stadium. Then we go to see the Bengals, Duke, Panthers, Florida Gators, Jaguars, Gators again, Dolphins and then the Bucs. Then Steph flies home just before the Saints game. She is gutted that she will not get to see New Orleans.

CSC: Surely your father will now disown you after this trip?

Adam: It's quite possible. [laughs] He wants me to settle and get a real job, etc. Maybe after this trip I will, who knows? He is supportive of my choices even if he doesn't agree with them.

CSC: Are you planning on making a career out of this?

Adam: I don't know. Who knows what doors will open. Personally, I can't see myself having a dual lifestyle for many more years. Teaching drama in the U.K for six months then following football for six months would be difficult to keep up. I'm open to suggestions.

CSC: The Saints are your second favorite team behind you-know-who. Have you been following any of the Saints moves this off-season?

Adam: [laughs] Well they were the first team I ever saw! I see my Bears grabbed Bullocks from you. Is he going to be any good for us? I see you guys have bumped up your secondary with a nice draft pick. I think you guys will do well and make the playoffs. Drew Brees is always good to watch and Reggie Bush should improve too.

CSC: Bullocks is going to transform the Bears defense. Promise.