Share All sharing options for: OMG!! Kush Breaks Up! 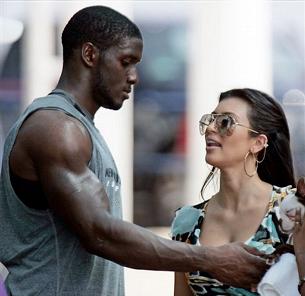 This is how I choose to remember Kush! (Photo Source)

It's a sad day in Who Dat Nation, friends.

It seems Reggie Bush and his long-time, bootylicious girlfriend Kim Kardashian, also known as Hollywood power couple Kush, have decided to end their relationship. Does this mean I can stop following Kim on Twitter?

The story was broken by US Weekly, who spoke with a Kim Kardashian representative.

"Nobody cheated," a source close to the couple says. "This is just a case of conflicting schedules and their lives going in different directions.

"It was a totally mutual decision,"

Mutual decision my ass. I'm sure Reggie just finally had enough of Kim's pressure to wed and all her talk of engagement to the tabloids.

"I am not engaged!" she wrote on her Web site. "The rumors about me picking out my ring already are also not true! I don't know where all this comes from!!"

Haha! That's funny. Good one, Kim. Oh, wait...what? You're not joking? Regardless, what better time for Reggie to lose the old ball-and-chain then right before training camp. Sounds like this was more his idea than hers. And I'm cool with that. Hopefully he's not taking the breakup like a wuss won't be crying into his football helmet. Tears are known to cause fumbles. So can we expect big things from Bush now?

In other news, football season can't get here soon enough.