By now we all know the power of Twitter and it's ever growing presence in so many aspects of our common culture, especially sports. So much so that tweets from Saints-related sources have now become regular fodder here on Da Chronic. We all have coach Sean Payton to thank for that, since he's been so kind as to not put the kibosh on tweeting. Unfortunately, he chooses not to participate in the fun himself. Surprising, right?. When asked by the local media if he was going to tweet his reply was simply, "No." But I've got to believe that Twitterville would be a much better place if coach was getting in on the action, too.

Inspired by the "Hacked" series of posts from SB Nation's Redskins blog, Hogs Haven, I decided to take matters into my own hands and do some "tweaking." What would Sean Payton's Twitter account look like if he had one? Make the jump and find out. 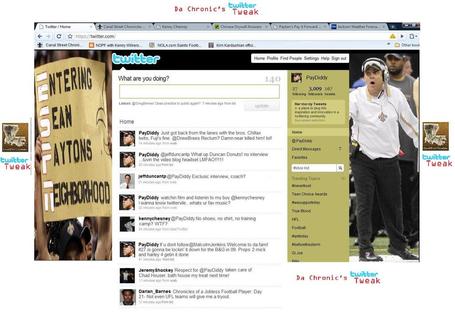 In case any of you are still confused, please note: This is not Sean Payton's Twitter account. Sean Payton does not even have a Twitter account (that we know of). Everything seen here, including other people and players, is purely fictitional. This is not real. Not real! Do you hear me!? It's fake!