That's what tonight was for me. Not so much because of the Saints on-field performance, though it did leave a bit to be desired, but because of the location of my new season tickets. While I was excited about being closer to mid-field this year and on the Saints side of the Dome, I was a little nervous about just how low and close to the field I was actually going to be. As it turns out, my fears were well founded.

After arriving late, being held up at the gate by the Ticket Fiasco of '09 (see below) and losing my friend I hurried through the concourse and rushed to my seats making it in time just to see the first series begin. I was both elated and pissed when I discovered that I would spending the season in the second row. Sure, it sounds awesome to be sitting only two rows back and with the team so close I can spit on them. I also think I'm surrounded by friends and family of the players. But it's a double-edged sword my friend. The damn players block my view of the field! And if it's not the players, it's the down markers or the television crane. Son of a...

I spent most of the game brooding and trying to rationalize this most recent turn of events in an effort to make myself feel better about the situation. Fortunately, I did realize two things. First of all, the Dome will be undergoing major renovations over the next two years and I thought I had remembered them saying the Plaza Level seats would be upgraded. Just checked the Superdome's webpage and my suspicion proved correct:

Perfect. I also remembered that this was pre-season and there are 80 players standing around. Once the season starts there will be 27 less people obstructing my view. Sweet.

So I'm willing to stick it out and see what happens. These things usually turn out alright for me. Regardless, this season is going to be interesting from the bottom of Section 140 and I genuinely think that the proximity of my seats to the Saints sidelines will completely change my perspective of the team. Though I may not have the best view of every down, I will be able to see the emotions and interactions betweens players and coaches as each play unfolds throughout the course of a game. Surely this will remain an eye-opening experience.

Enough about my own personal tribulations, let's get down to what we all came here to talk about: The game. After the jump are my initial notes in no particular order, personal pictures from the game and the open thread roll call. Remember that I haven't watched the game again on television and with the crummy new view from my seats, I could really be off base on some of these observations. Make sure to click the picture for all of the AP's photos from last nights game. 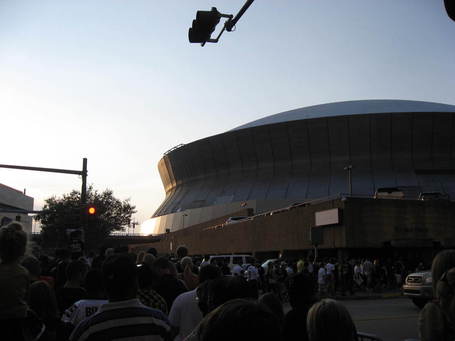 The Dome at dusk. 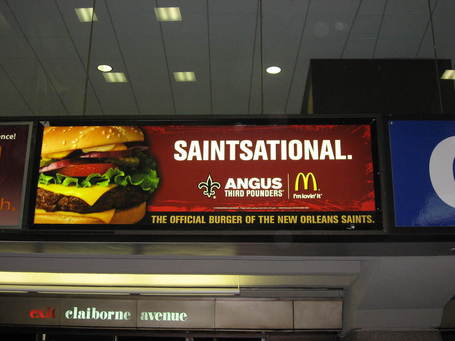 I've already had my lawyers contact their lawyers regarding naming rights. They're gonna pay for this. 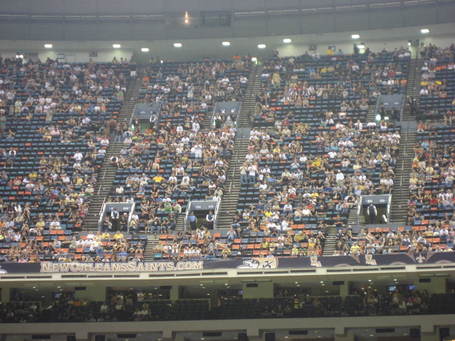 The stadium was nowhere near full. 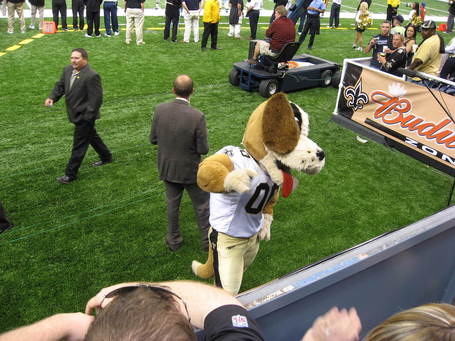 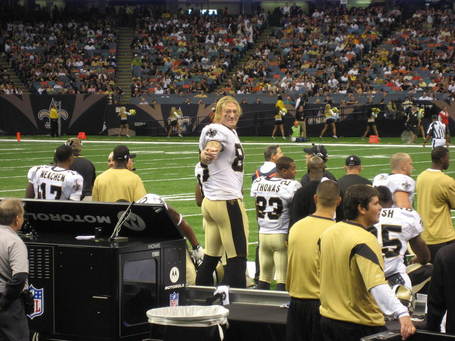 Shockey interacting with the crowd. He really is a ham. 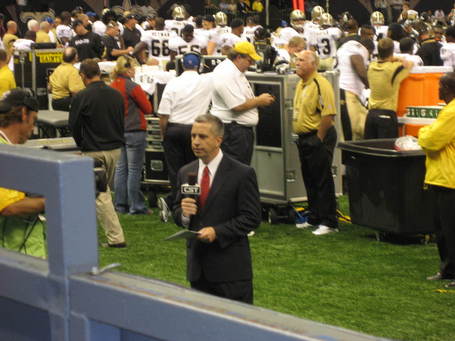 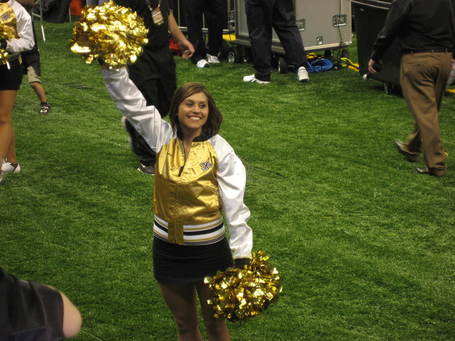 For the single guys. 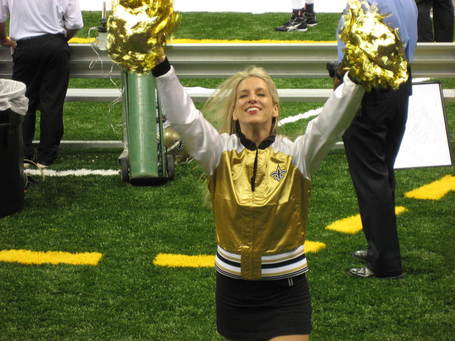 More for the single guys. 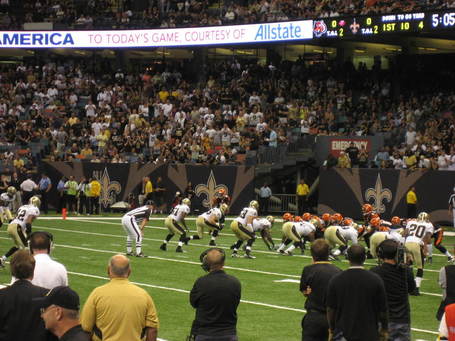 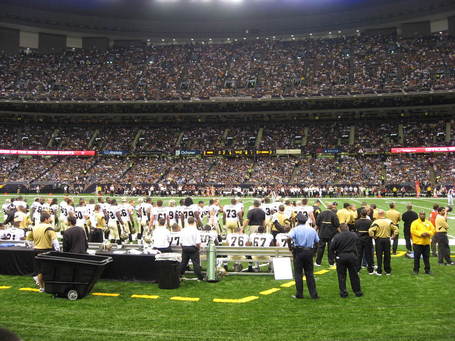 I can barely see the damn field. 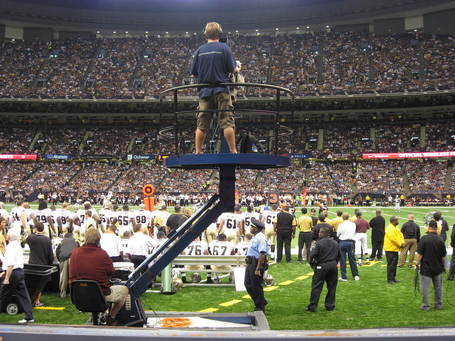 Lovely. Couldn't have found a better place for that thing. 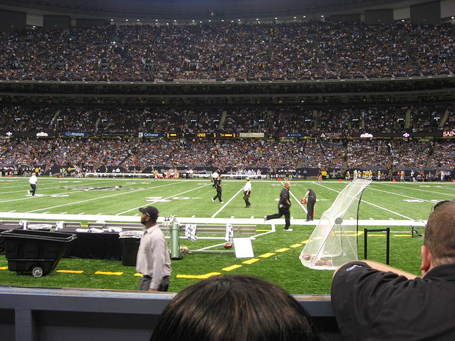 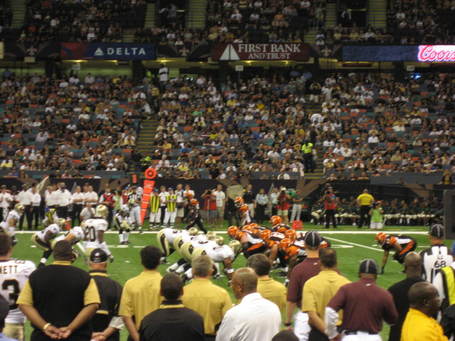 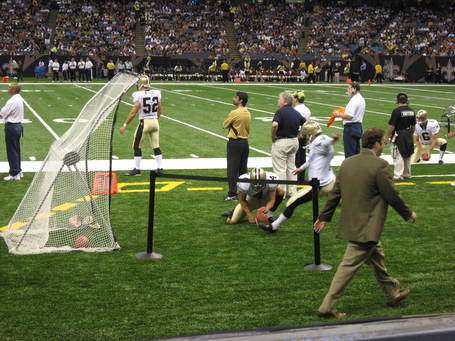 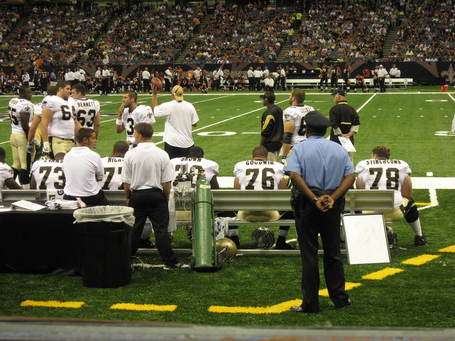 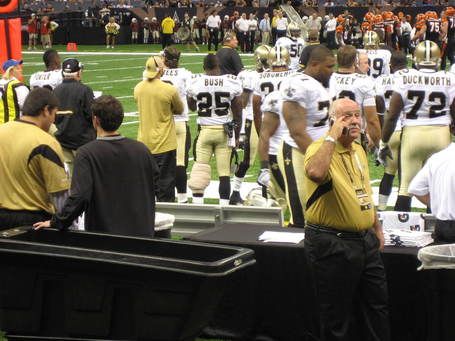 Reggie icing up the knee.

Here is the roll call for last nights open thread. Thanks to everyone who stopped by. It was great to see so many names on there.