Malcolm in the Middle

Share All sharing options for: Malcolm in the Middle 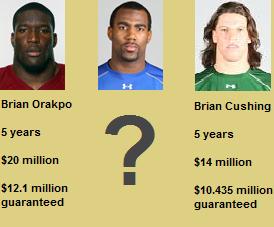 Clowns to the left of me, jokers to the right. Here I am.

We are now four days into 2009 training camp and the standoff between first round draft pick Malcolm Jenkins and the Saints organization is still moving nowhere. Not surprising really because last years first round pick, Sedrick Ellis, didn't get into camp until day six, though Ellis had a higher draft status. What is surprising, however, is that fact that the players drafted both before and after Jenkins have already signed, yet this delay still exists. The whole delay is made even more curious by the fact that all three players involved are represented by the same agents, Tom Condon and Ben Dogra of Creative Artists Agency (CAA Sports).

Brian Orakpo, the thirteenth overall pick by the Redskins, has already signed a five year contract worth $20 million dollars and $12.1 million guaranteed. Fifteenth overall draft selection Brian Cushing has also agreed to a five year contract with the Houston Texans worth $14 million and $10.435 million guaranteed. So you would think that figuring out the terms of fourteenth overall pick Malcolm Jenkins' deal should be a piece of cake, given that rookie contracts are all relative to each other and the hard work has already been completed. Theoretically, he should be signing a  five year contract worth approximately $17 million with an $11.3 million signing bonus; right smack in the middle of Brian and Brian.

Not only does Jenkins find himself between two already-signed draft picks, Malcolm is also stuck in the middle of a holdout between his future team and his representation. But before you rush to judgement, it may not be greedy agents holding up the process. In fact, the lack of negotiation has led some to speculate that it is, in fact, the Saints organization being difficult in getting this deal done, not Jenkins and his agent. Pro Football Talk was the first to raise any questions...

So maybe in this case the team is the party that's being unreasonable.

I would say that sounds like a pretty reasonable hypothesis, even if it is Pro Football Talk. Again, Loomis and Co. don't really have much wiggle room with regards to the length of the contract or how much Jenkins is worth since Orakpo and Cushing have already set the boundaries. Unless his agents are attempting to go the way of Jets cornerback Darelle Revis two years ago. What would be a point of contention between the two sides, however, is how that money gets paid out. That is the exact conclusion the Times-Pic reached yesterday, though they never attempt to place blame on any party....

The hangup now appears to be the structure of the contract, and my instincts say the two sides are still miles apart.

So what could possibly be the cause of this difference in opinion over the structure of Malcolm Jenkins' contract?

Obviously we don't know the gritty details of the negotiations but there could be any number of reasons for the stalled talks. Signing bonuses, incentives, escalators, whatever. But the most important thing to keep in mind and probably the biggest factor behind all of this is the possibility of an uncapped 2010 season. Like a black cloud, it looms over every decision an NFL team makes this year in regards to player salaries and it's made things that much more difficult this year. According to NFLPA Director of Salary Cap & Agent Administration Mark Levin...

"First and second-round rookies will have to navigate their way around more restrictive rules this year regarding incentives, roster bonuses and salary guarantees in the uncapped years..."

In fact, the possibility of an uncapped season also weighed heavily in the decision by the Saints to hire salary cap wizard Khai Harley as their Director of Football Administration last year. With his help, the Saints worked their magic with the contracts of Jonathan Vilma, Jon Stinchcomb and Jabari Greer, by using the somewhat irregular "completion bonus" in their structure and avoiding certain limitations. The team may again be trying to include some out of the ordinary clauses that might cause delay.

No doubt that Harley and the rest of the Saints number crunchers have looked into their crystal ball and have a good idea of where their larger contracts need to fall in the upcoming years to still field a talented team in the event of no salary cap. They also should have pre-allocated their rookie cap pool numbers. So it's very possible that the Saints have their own, creative contract structure in mind that works well with their budget plans. Unfortunately, it may be unfamiliar to Jenkins agents or might not be what CAA has in mind for their client. Or, hypothetically, there could be problems with contract incentives. With no cap next season, not only will "likely to be earned" (LTBE) incentives count toward this years cap but so will "not likely to be earned" (NLTBE) incentives. That could be a problem for the Saints. Just as likely, they could be arguing over the payout terms of the signing bonus and how much of it will actually get deferred. Again, these are just examples; the possible snags are numerous and could be major or minor.

Regardless of the reason for the slow negotiation process thus far between the Saints and the Jenkins camp, chances are pretty good a deal will get done shortly. In the meantime, poor Malcolm is caught in the middle of a numbers game with nothing to do but sit and wait. Per Twitter...

Im running out of reasonable ideas... its kinda boring doing everything alone

i seriously need a hobby... any ideas?

Here's hoping the two sides get a deal done soon so Jenkins can get to camp and show us all what he's got. Before he dies of boredom.