NFC Championship: Keys to the Game

Share All sharing options for: NFC Championship: Keys to the Game 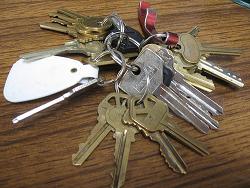 This post is undoubtedly not going where you think it is but I'll be damned if the title isn't as clever as it is dubious.

Yesterday Kristian Garic called out members of Who Dat Nation that will be in attendance at Sunday's game and demanded them to get as loud as possible. I couldn't agree more. Being a season ticket holder myself, I'm a huge proponent of crowd noise. It's the most important aspect of home-field advantage.

But a persons voice can only get so loud, tiring as the game wears on. It would be a lot cooler if fans could bring something to help aid them in their effort; megaphones perhaps. Alas, as Garic points out...

No Fun League. Then I learned something interesting later in the evening as I was listening to WWL's Sports Talk in my car on the way to dinner. Bobby and Deke had a guest caller who, right before hanging up, had one piece of advice for fans at the game this Sunday: Take out your keys and jingle them. If you're into college football, you may have seen this done before on "key" downs or when the opponent is getting beat so bad it's time for them to just get their keys and leave. Apparently, aside from being meaningful, it's got a pretty significant auditory effect as well.

I've personally never heard of this tactic before but it's simple and makes sense. One set of keys alone doesn't really seem intimidating but think about the high-pitch of 69,000 sets of door openers clinking and clanking inside a closed roof building. And I'm not saying fans should do this instead of screaming and yelling. Oh no. I'm talking about jingling your keys in addition to shouting at the top of your lungs. Think about the decibel possibilities! And, of course, this is totally legal since all fans are allowed to bring their house keys to the game with them. Catch us now, Goodell!

So I'm calling for a Key-Out this Sunday. Yeah, you heard me right. Janitors, unite!

Forget a blackout this weekend; it's ineffective and has no bearing on the game. Disrupting the Vikings in the huddle and at the line, now that's making a difference. But to make it work, most fans in attendance need to be on board with the plan. I'm down if you're down. Can we make it happen or is this just wishful thinking?