Share All sharing options for: 4th and Geaux: Saints vs. Browns Edition

Welcome back, Saints fans. This is my second weekly column previewing the Saints' upcoming game, and I've decided to call it 4th and Geaux. At least until I change my mind.

So, without further ado, let's kick it.

What a week it's been: the Saints finally looked good, really good, against a team that was playing well coming into the game. The running game was good, although dedicated Who Dat Report viewers know that, during the most critical parts of the game, our passing offense was even better. Still, my game ball goes to the entire offense, but I guess I'm an easier grader than Andrew is.

However, not everything is rosy in Saintsland. We're still a bit banged up, and have only looked like a great team for one week. My biggest concern is that we've had what might be the easiest schedule in the NFL so far, and haven't looked awesome. While it's great to eke out victories, great teams tend to dominate inferior opponents. I'd like to see us doing that more.

The season's long, though, so I'll be happy with steady improvement going forward.

There were some great comments in last week's post, and I wanted to respond to them here. If you have questions or comments for next week's column, leave them in the comments section below or send me an email to stuart (at) whodatreport (dot) com. Thanks!

Does the deep pass set up the run?

HansDat writes: I agree with the general idea of the pass setting up the run, for both the Saints and the NFL as an overall trend.

But what I want to know is, do you think it’s necessarily the DEEP PASSING GAME that loosens up the "D" to be susceptible to the run, or could it be ANY established success in passing that frees up the run to work later…

Generally, I think any sort of passing success is what sets up the run, because teams primarily run a lot when they’re winning and trying to run out the clock.

With the Saints, though, I think the deep pass is an important part of their offense, and has been strangely missing this year. We haven’t had the insane Brees-Colston hookups this year, in which Colston is double-covered 25 yards downfield, and Brees chucks it to him anyway for a completion.

Good fodder for a future column, but I hope that helps.

Who are you, anyway?

HansDat again: Innocent curiosity as to your personal history (we share personal Saints history stories from time to time here on CSC) – How long have you lived in New Orleans and been a Saints fan (do you live in New Orleans)? Raised in a family of Saints fans? Expound, please.

As far as my background, I’ve started to fill out my bio page, but the brief version: Born and raised in NOLA, lived there until I graduated from Tulane at age 22. I’m now stuck in Gator country, where I’m working toward a PhD in UF’s School of Natural Resources and Environment.

My sister was a good athlete, so we were often traveling to soccer or softball tournaments on the weekend, so I’m quite familiar with Jim and Archie, then Jim and Stan Brock, and now Jim and Hokie.

I sold beer at the Super Dome (and the NO Brass at Municipal Auditorium and the NO Arena, and the Zephyrs games, for that matter, at both UNO and the new joint) for the end of the Ditka era and the beginning of the Haslett era, including the Hakim Dropped the Ball game. I’ve watched or listened to nearly every Saints game for as long as I can remember.

Why adjust your YPA stats?

A couple of people asked about the adjustments I make to get my aYPA figure. Here's one of them from hakimdropstheball: Where did the 60 yards come from? Should you maybe count INTs as less and than adjust it for INTs or fumbles that lead directly to points?

Do you have points of reference/comparison for the rest of the league? For instance, does this way of thinking make Mark Sanchez look good? He actually is playing very well this year. Conversely, does Carson Palmer look like dog crap?

The 60 yards came from a couple of articles that I read a few years ago, which I can't find right now to save my life. The gist of the articles was this: the average "cost" of an interception was about 60 yards of offense. However, an average is just an average. Some games, a QB may throw 1 or 2 devastating interceptions, and other days he might throw 1 or 2 less costly ones. That’s the nature of the beast. However, over the course of a whole season, it’ll hopefully even out.

Here's the funny thing, though: the adjustment doesn't make a huge difference. I happen to have all of the 2009 YPA data, so I ran a quick correlation between YPA and winning using standard YPA (with no adjustments), and three types of adjusted YPA:

It turns out that the correlation between all three adjusted YPAs and winning is about 82-83%, which is a really great correlation. But, they weren't that different from each other.

So, according to the 2009 data, it doesn't really matter if you penalize 0 yards, 30 yards, or 60 yards, you'll get something with a very good correlation to winning. I'll try to expand this study in the offseason to include more years' data and we'll see what happens.

Two other interesting notes: First, if you don't adjust for sacks or interceptions, "standard" YPA has about a 79% correlation with winning, which is good, but not as good as any of the adjusted versions.

Second, plain old passing yardage was had a much worse correlation with winning, about 65%. So, you'd be better off ignoring passing yards and paying attention to one of the YPA stats if you're trying to get a handle on how good an offense is.

What about Carson Palmer and Mark Sanchez? I calculated their stats before last week's games. Let's take a look:

Palmer’s average aYPA is 4.22, which is would have been in the bottom third of the league last year. That includes a good game with 8.65 aYPA against the Browns (hope for us this week!) and the Bengals-Ravens game that I’m going to call The Game In Which Offense Went To Die, during which Palmer’s aYPA was a mediocre 4.42 and Flacco’s was a stunningly bad -2.25 thanks to 4 picks. The Bengals won 15-10, or 5 field goals to 1 field goal and a touchdown.

If you take out the good game, Palmer’s aYPA falls to 3.11 for the year, which is terrible. You might even say dog crap.

The Browns have been terrible this year, and their record shows it. They're also missing their best player, Josh Cribbs, thanks to a nasty hit by Steelers' linebacker James Harrison. Harrison also took out receiver Mohamed Massaquoi (on a hit that cost Harrison $75,000 and should've caused a penalty and suspension, but that's a different story), so the Browns are down to a bunch of scrubs on offense. I don't think that'll help rookie Colt McCoy in his second start.

Let's go into more detail in our Saints Statpoints section. Thanks to reader SaintsFanMD for idea behind that name.

The Saints' offense looked great last week, racking up 6.34 aYPA (remember, aYPA is YPA adjusted for sacks and interceptions), which is much closer to last year's offense (which averaged 6.45 aYPA). The running game was good, but the passing game was just as important, if not more so, in the most critical parts of the game.

So, will we be able to keep it up against the Browns? I think so. The Browns have given up an average of 5.84 aYPA this year, and that includes one great game against Kansas City (which the Browns managed to lose somehow). If you just look at the Browns' last 4 weeks, their average aYPA allowed is 7.43. That's a sign of a bad defense.

According to Football Outsiders, the Browns are the 8th best team in the NFL at stopping the run on 3rd or 4th down and short yardage to go. The Browns stopped 45% of those runs, whereas the league average is 37%. This means the Saints' might do well to indulge Sean Payton's passing fetish on 3rd or 4th and short, even though it gets annoying as a fan.

The Browns are an average pass rush team. While they have 10 sacks, their adjusted sack rate (a Football Outsiders stat that attempts to control for down, distance, and so on) is only 6.2%. That means that Brew Drees should have some time to throw the ball against this mediocre defense. Exciting!

The Browns' offense is...not so good. They've averaged 3.86 aYPA, which would have been in the bottom third of the league last year. This is Colt McCoy's second start of the year, and so you'd hope that Gregg Williams' defensive schemes would be able to confuse him into making some poor throws. Of course, I said the same thing about Jimmy Clausen, and we all know how that worked out.

With the injuries to Cribbs and Massaquoi, the Saints' defense should dominate this game. We've held our (admittedly, crappy) opponents to 4.75 aYPA this year, and should easily beat that this week. The biggest concern to me is the health of Jabari Greer. When healthy, he's a top 5 cornerback (maybe even top 3), and our defense suffers without him. Fortunately, this is a good week for him to be hobbled.

In short, we have a middle-of-the-pack defense, but that should be good enough for this game.

Well, the local beer store didn't have any Cleveland-area beer, so this week's beer is from Michigan. Bell's Two-Hearted Ale is one of my favorite IPAs, and is probably the beer I drink the most. It's a light amber color with a beautiful white head (no Favre jokes), crisp and citrusy, almost juicy with grapefruit and apricot. It's moderately hoppy (for an IPA), moderately bitter, and unbelievably drinkable. Just a world-class beer, in my opinion, and a staple in our house. I can't recommend it enough. 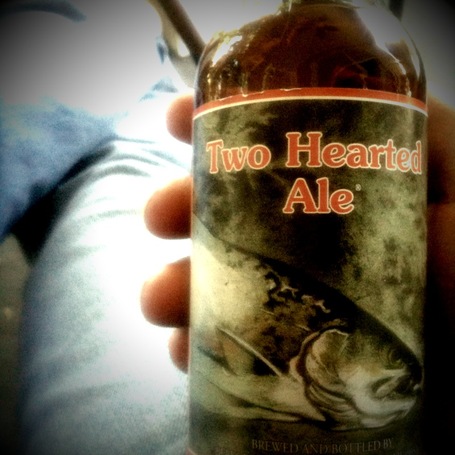 The beer also gets bonus points because it's named after the Two Hearted River, a famous trout stream on Michigan's Upper Peninsula that inspired a great Hemingway short story called "Big Two-Hearted River". So, you get to feel smart while drinking a world-class beer. Life is grand sometimes.

Sure thing. The Saints were good last week both running and passing the ball. While many people focused on the running game, the passing game may have been more important. This week, the Browns' defense isn't very good, their offense may be worse, their best player is injured, and they're starting a rookie quarterback. The Saints should win handily, and if they don't, then we should be worried. Also, Bell's Two-Hearted Ale is fantastic.

Thanks for reading, and go Saints!

You can listen to Stuart each week on The Who Dat Report, or follow him on Twitter.