Share All sharing options for: 4th and Geaux: Saints vs. Steelers Edition

Well, wasn't last week a blast? In last week's column, I pointed out a bunch of different reasons why the Saints, even if they played poorly, should have beaten the Browns handily. They played the game and...not so much. What does that mean for this week?

It's time for 4th and Geaux.

That was a mystifying loss. The Browns' offense was just as mediocre as I thought it'd be: Colt McCoy and Peyton Hillis combined for 4.72 aYPA (yard per attempt adjusted for sacks and interceptions...see the archives for more info), which is middle-of-the-pack. That's a great job by our defense once you consider our injury-riddled secondary.

When the Saints' defense holds the other team to 4.73 aYPA, the Saints should win by two touchdowns. They didn't this week...why not?

Brew Drees threw 4 interceptions, although at least 3 of the picks were team efforts. Let's look at each of them:

On Brees' first interception, the Browns lined up in a "muddle" defense, with a bunch of guys standing around and only 1 down lineman. On this play, the Browns rushed 3 guys, but still managed to get pressure on Brees. Drew threw the ball one way while Ladell Betts cut the other way. The result: an interception for the Asian Assasin. It's hard to assign blame to Brees or Betts without knowing the exact play call. But there's no way the QB should have been under pressure when they have 6 blockers assigned to block 3 guys.

The second interception was David Bowens' first touchdown of the day. On that play, Matt Roth blew up Jon Stinchcomb and got a hand on Brees, who should've just taken the sack. Unfortunately, Drew tried to get rid of the ball, and it bounced off Jahri Evans and into Bowens' hands. So, blame that interception on bad line play, a bad decision by Brees, and bad luck.

Drew's third interception came at the end of the 1st half, and it appeared to be a poor pass to Meachem. Looking at the replay, Drew should've led Meachem to the right, away from the defender, but he just misfired on the pass. That interception was likely Brees' fault.

Drew's final interception was David Bowens' second touchdown. Bowens didn't rush on the play, but hung out around the line of scrimmage. Carl Nicks appears to have been assigned to block Bowens, but since Bowens didn't rush, Nicks basically stood in front of him and looked pretty. Had Nicks engaged Bowens in a block, Bowens wouldn't have been able to make the interception. As it was, Drew apparently didn't see Bowens (perhaps because of Drew's height issues?) and the end result was interception #4, and game over.

So, four interceptions, one of which was almost definitely Drew's fault, the rest of which were team efforts. All said, a terrible job by the offense. The stats back it up: the Saints' aYPA was 1.63, by far their worst of the year.

Chalk that loss up to poor line play, poor offense in general, and a great job of coaching by the Browns' staff. Their defense had us confused all day, and their trickery on offense and special teams gave them the early lead they needed to finish us off. Well done by them, and not-so-well done by the Saints.

What does this mean going forward? Right now, the Saints remain a mediocre team. We've had one of the two or three easiest schedules in the NFL so far, and have put together exactly one solid game. We've got an easy schedule ahead, which is good, and are getting healthy soon on offense, which is also good.

Given the sorry state of the NFC, the Saints are still in great position to earn a playoff berth, even if it's just a wildcard. Mediocre might just be good enough.

More mailbag fun this week. Have a question for the mailbag? Leave it in the comments or send it via email to stuart (at) whodatreport (dot) com.

Does your adjusted YPA stat have a ‘tipping point’ number? Meaning, where is the line where you can look at a QB and say, "okay, he’s good" versus "wow, dog crap!" -Hakimdropstheball, via the comments.

Two points that I’ll make, though: First, it’s really a measure of offensive performance, not just QB. Although the QB makes the pass, the whole team is responsible for completing it.

Second: I grade on a curve when I make comments. For example, if we average 5.1 YPA in a game, I’ll probably call it mediocre, because our offense needs to be better than that.

I'll try to spend some time verifying these rules of thumb over the offseason, but I think they work for now.

With a disgruntled A.J. Hawk in Green Bay, do you see the Saints making a move for him? After all, Scott Shanle has shown a lot of signs that his play is dropping out of the mediocre level to below mediocre. I believe having a talent at weakside like hawk could beef up our linebackers towards being an elite unit with Vilma already running the middle and Danny Clark looking sharp as of late. -YungSal, New Orleans

This is really a two-part question. First: would the Saints want A.J. Hawk, and second, could they get him?

I think you're right, Hawk would fit in pretty well with the Saints' defense. He's a bit of a liability in pass coverage but pretty strong against the run, an area where the Saints defense is generally weak. While Hawk isn't the superstar that many thought he'd be, he's a good player who might thrive in the right system, and would be a nice addition for the right price.

But there's the rub: what's the price? Hawk is due $10 million next year, and I don't think the Saints want to tie that much money up in a non-Pro Bowl linebacker. Even if there isn't a salary cap next year (and who knows whether there will be), the Saints almost definitely have an internal salary cap, and they're going to be spending a lot of money extending the contracts of some of their current stars. I'd be surprised if $10 million for A.J. Hawk fits into those plans. So, I'd say an offseason trade for Hawk is unlikely, because the Saints wouldn't want to eat his contract.

That means that for us to get Hawk, Green Bay would have to cut him and we'd pick him up as a free agent. While that's a possibility, there's a long time between now and the offseason, and who knows what could happen? With Nick Barnett on injured reserve, Hawk will get a lot more playing time, so we should have a better idea of how much he's worth by the end of the season.

The Pittsburgh Steelers are one of the top two or three teams in the NFL. The Saints have been mediocre, and will likely struggle against the Steelers. However, there are glimmers of hope for the Saints, although most of those glimmers fall back on the same point: if the Saints could play like they played last year, they'd be a lot better. Let's look at the game in a little more detail:

Pittsburgh's defense will likely make things difficult for the Saints' struggling offense. Pittsburgh's allowed an average of 3.94 aYPA this year, which is solid. Most of the advanced stats folks (like those at Football Outsiders, Cold Hard Football Facts, and so on) have the Steelers ranked as one of the top couple in the league. They excel at both pass defense and run defense, which makes them a tough nut to crack.

And we need to exploit them early and often. The Steelers are one of the best teams in the league at locking down an opponent and causing them to play catch-up: Steelers' opponents have only run 27 plays while ahead this year.

Overall, while the Steelers have an excellent defense, the Saints have an offense that may be able to take advantage of their defense. Drew Brees needs to spread the ball around, but to do that, he needs to have time to throw. I'm not convinced that our offensive line will provide him with that.

This matchup is a bit hard to analyze because of Ben Roethlisberger's suspension. The Steelers' offense was pretty bad for their first 4 games (3.24 aYPA), and has been really good over their last two (9.67 aYPA). It's always nice to get a top 10 QB back, eh?

So, instead of going into a bunch of in-depth stats about the Steelers' offense that may not be valid, I'll take this section to point out that the Saints' defense has continued to be middle-of-the-pack this year. There are at least two ways to interpret this, you can pick your favorite:

While there's truth to both interpretations, I lean toward the first, though I'd love it if our defense could take advantage of at least one rookie quarterback. Just one!

This week's beer comes from Weyerbacher, a small brewery about an hour outside of Pittsburgh.

The beer is Weyerbacher's Harvest Ale, another IPA that's made with fresh hops from the brewer's farm. I was really excited to try this beer because it's sold in 4-packs. Any time a beer comes in 4-packs, I figure it has to be good, right? 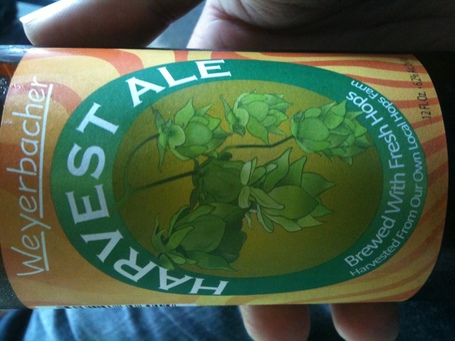 (I have no idea why that picture's sideways. Hopefully you're using a laptop and can just flip your computer. Or use your imagination. Or drink a few beers yourself and end up sideways.)

Not necessarily. I was really unimpressed by the Harvest Ale, despite my hopes. The beer looks good, pours with a nice color and head, but the taste was just kind of off. I didn't notice much in the way of hops (despite their supposed freshness), it was a bit too malty and, as they say, "off balance". I'm not saying it's a bad beer, just not one that I'd buy again.

I'd rate this beer a Vaughn Dunbar: something you're excited to get at first, and you think will make things a lot better, but then ends up being kind of disappointing. Sometimes you've got to find a few Vaughn Dunbars in order to land a true star, so it's definitely worth the effort.

The Saints stunk last week, although the interceptions were probably team efforts and not just Brew Drees' fault. The Steelers are one of the best teams in the NFL, especially now that they have Ben Roethlisberger back, and will probably be a tough opponent for the Saints, who are injured and playing mediocre football right now. However, there are two glimmers of hope: first, the Steelers might be vulnerable against a quarterback who can spread the ball around like Drew Brees can, and second, the NFC is wide open, like I discussed on this week's Who Dat Report. So, while I think the Steelers will probably win the game, the Saints season is far from over, even if things look a bit bleak right now.

Thanks for reading, and go Saints!

You can listen to Stuart each week on The Who Dat Report, or follow him on Twitter.