Last week, I predicted that the Saints' tight ends would have a good day against Carolina and that they needed to watch out for trick plays by the desperate Panthers. After the hard work of actually getting a couple of predictions right, I thought about retiring the column and quitting while I was ahead.

It's time for 4th and Geaux.

Looking at the numbers, the Saints offense actually wasn't that efficient, averaging 4.16 aYPA (yards per attempt adjusted for sacks and interceptions, see the archives or leave a note in the comment thread for more info), which isn't that great. If you take out Chase Daniel's efforts (which included 1 sack and no other passing attempts), the offense's aYPA goes up to 4.49, which is a bit better, but still not great.

However, the offense was still able to score 27 points (remember, there was one defensive touchdown) despite the middling aYPA. How were they able to do it?

The answer is pretty straightforward: the defense set up the offense. The Saints defense manhandled the Panthers, holding them to 0.2 aYPA, by far their stingiest outing this year. The Panthers only converted 1 third down and only made 15 first downs (compared to 27 for the Saints). Because the Saints defense did such a good job of stuffing the Panthers, their offense had plenty of opportunities to rack up yards and points. aYPA is a measure of offensive efficiency. If you get a lot of opportunities, you don't necessarily need to be all that efficient to score points. The Saints defense gave the offense opportunities, and they were able to take advantage, even if they weren't efficient in doing so.

Now, before we get too excited about this week's performance, let's remember that the Saints were playing a JV team out there. Carolina is missing players at practically every position, and their lame duck coach hasn't been able to get much blood out of the stone that is their offense. While I said on this week's NFC South Report (SUBTLE PLUG FOR MY NEW PODCAST, LISTEN OR TUNE IN LIVE AT WWW.NFCSOUTHREPORT.COM) that I hope the Panthers will beat the Bucs this week, I don't anticipate it. The Panthers are just too injured and untalented right now to pose much of a threat to anyone.

So I'm glad that the Saints defense did well, but I don't know how meaningful the performance is. I'm just relieved that they didn't do poorly.

Since this is a bye week, this week's mailbag is a bit far afield. That's fine: I specialize in the far afield.

Do you have a question for the mailbag? Leave it in the comments or send it via email to stuart (at) whodatreport (dot) com

Can you maybe add a nice wine to your beer of the week? Sorry…but i view beer as one step up from garbage. Although if i had to choose beer vs coffee….I’d probably go with an incredibly watered down Coors Light. Perhaps a pleasant tea? I do love tea. - jeff.l.b, in the comments thread

No beer, no coffee, eh? Well, I don't think we have a lot in common, libation-wise.

I'd love to add a nice wine to the beer of the week, but I'm afraid I don't have the knowledge. Wine appreciation is a much more expensive hobby than beer appreciation, and not in my budget right now. The upside of not being able to appreciate good wine is that I don't have to buy good wine, which is often rather expensive. It's much cheaper to drink crappy wine. Maybe I should ask Dave for a raise?

You might like some of the fancy Belgian beers, like the St. Bernadus Abt. 12. They tend to be quite fruity, although a little pricey and hard to find. In fact, I'll make the St. Bernadus this week's beer pick, so scroll down for more.

Also, "incredibly watered down Coors Light" is rather redundant.

Well, the bye week is undefeated this year, but I did notice that Sean Payton is giving the team the entire week off. If you're a Saints player, that probably counts as a victory over the bye.

Since there's no game this week, I'll take this section to nominate my offensive and defensive MVPs of the first half (+1 game) of the season.

Offense: I was tempted to try to be different and give the award to Lance Moore. Mighty Might has been our best, most consistent receiver, and he leads the team in the critical celebrations-after-getting-a-first-down statistic. Moore has been excellent this year, even scoring a special teams touchdown.

However, let's be honest. The true MVP of our team is Mr. Tee Ball himself, Drew Brees. Even though he hasn't been playing as well this year as last, he is unsurpassed in his ability to find the open receiver, regardless of who it is. Brew Drees makes our offense go, and makes folks like Lance Moore look better than they actually are. For that reason, he's our offensive MVP.

Defense: The defense has been quite good this year (although against a suite of bad offenses) despite a bunch of injuries. Just about every member of the secondary is or has been injured, and I think Gregg Williams actually ran out of duct tape and glue at one point this year as he tried to patch things together.

For that reason, I'll award the MVP to the captain of the defense, Jon Vilma. Gregg Williams gets a little crazy with the defense on occasion, and it's Vilma's job to decipher the craziness, shore up the assignments, and make the whole engine run. He's done a good job so far this year.

This week's beer is St. Bernadus Abt 12, a Belgian quadrupel made in the same style as the famous Trappist Monks' beer. Belgian quadrupels tend to be dark, spicy, fruity, and malty, with very little bitterness and a high alcohol content. Quadrupels tend to have a bolder, stronger flavor than dubbels and tripels, which are brewed in a similar style.

St. Bernadus is all of this and more, and is probably the best "quad" that you can buy without visiting a monastery. 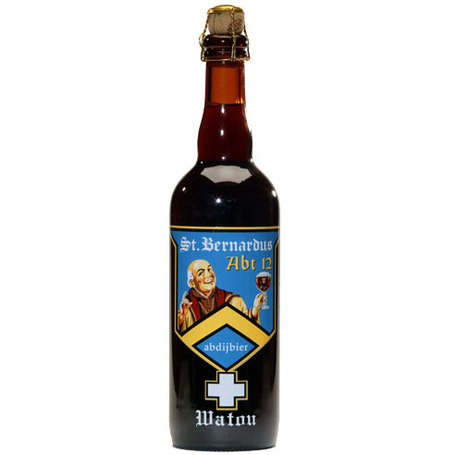 (You can tell it's a good beer because it has a cork. Classy!)

St. Bernadus Abt 12 pours beautifully dark, with a frothy, thick head, and I taste a spicy, fruity mix of plum, cranberry, and cloves (the clove is likely from the Belgian yeast). Yeasty, sweet and malty, but not overpoweringly so. Quite smooth, and quite drinkable for such a high ABV.

If you like the particular style, this beer is one of the finest in the world. You could pair it with food, but the drink is so complex on it's own that I wouldn't necessarily bother. However, I think it'd go great with a feast. Genuinely excellent.

I'm going to rate this beer a Willie Roaf: you can search long and hard, but you'll rarely find something better. It can anchor a large meal or even serve as a meal on its own. Plus, it comes in a big bottle, and Willie Roaf was a big boy.

It wasn't that long this week...we're on a bye week! However, the Saints defense looked excellent last week, although I'm not sure what that means because Carolina isn't an NFL-caliber team right now. Still, I'd rather look good than not, so we'll take it. St. Bernadus is good.

BONUS SECOND PARAGRAPH THAT UNDERMINES THE ENTIRE PURPOSE OF HAVING A SUMMARY: As far as predictions, the Saints are in a good position to earn a playoff berth. I don't believe this team is nearly as good as last year's team, because they've played worse against worse competition. However, the Saints are 6-3, meaning they can finish the year 4-3 and probably make the playoffs. I like their chances of doing that, especially because the Saints' remaining schedule features two good teams (Baltimore and Atlanta) and a river of crap. If they can't get 4 victories out of the remaining schedule, then they don't deserve to be in the playoffs. With the way the Saints have played so far this year, I wouldn't expect them to go far in the playoffs (though anything can happen), but ask me again a bit later when Reggie Bush, Pierre Thomas, and some other folks are back from injury.

You can listen to Stuart each week on The Who Dat Report, live each Tuesday on the NFC South Report, or follow him on Twitter.