"Sickest" Play of the Week: The BaltiMoore Bobble

Share All sharing options for: "Sickest" Play of the Week: The BaltiMoore Bobble

Another two weeks has gone by which means it's time again for me to bring you one of our Vicks sponsored posts. And since I had a couple of options from the Saints crushing loss to the Ravens on Sunday, I've decided to go with the "sickest play" theme this week.

In serious consideration was Jimmy Graham's first touchdown catch of the game, which was an amazing one-handed grab and turn. Plays like that from the rookie tight end make me giddy with excitement about the kids future. When I first saw it, I didn't think anything else that day would be able to top it.

But I was wrong. Because it was the tying score at an important juncture of the game, was the result of heads-up hustle and had slightly more "wow" factor, I just have to go with Lance Moore's touchdown catch - which I have now dubbed "The BaltiMoore Bobble" - for our post this week. After the jump I will break down the play frame by frame so we can all relive one of the more positive things to happen on an otherwise negative afternoon.

And since this is one of two sweet catches made by Lance Moore in recent memory, I'm posing a serious question in our poll. Your vote and comments on the subject are wanted. 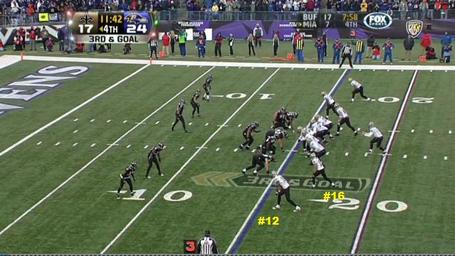 Pre-snap: It's 3rd and goal from the 15-yard line with the Saints down by seven. A touchdown would be much more preferred than settling for a field goal so the Saints take a shot at the end zone. Drew is in the shotgun; five receivers with Colston on the outside and Moore inside to the left. The Ravens appear to be in man-to-man coverage. 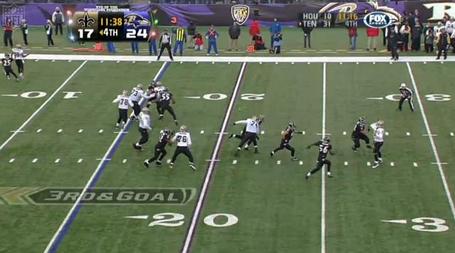 Moore runs an out route, makes himself available, then turns upfield toward the end zone when he doesn't get that look. Colston heads straight to the corner of the end zone. The Ravens bring a two-man blitz and - surprise, surprise - Drew has two guys in his face. He lobs it up a little flat-footed toward the end zone. 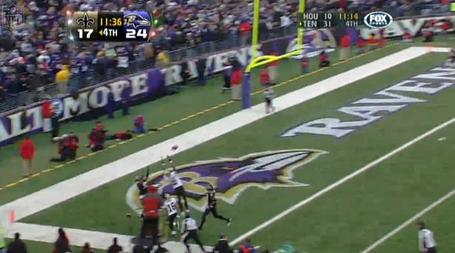 The pass is originally intended to be a jump ball for Marques Colston who has good inside position on his defender, CB Josh Wilson. You can clearly see the ball about to reach Colston in this picture. Moore has also arrived in the end zone at this point. 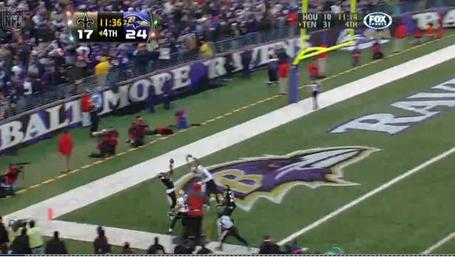 But it gets through Colston's hands and instead hits Wilson's hands. He thinks his job is done. 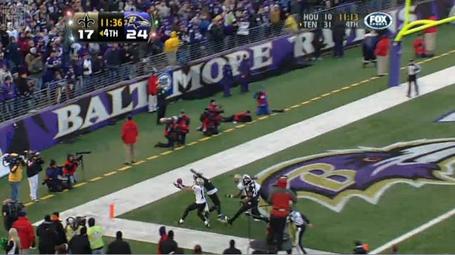 But Lance is a heads-up player and he's in perfect position to grab the deflected ball. 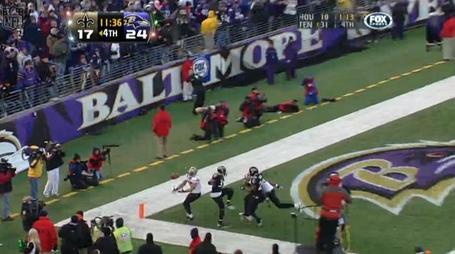 Moore bobbles the first attempt as he continues to corral the ball. 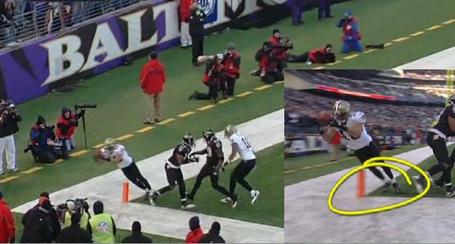 As Lance gets the ball in his possession, he then switches his focus to maintaining his feet in bounds. Like a graceful ballerina, he drags his toes just inside the line. Wow! That takes concentration. 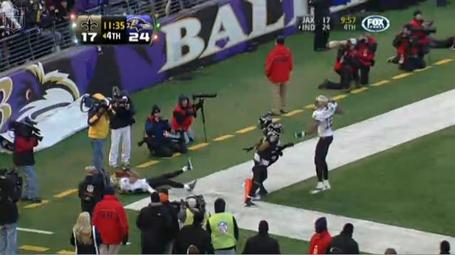 Fortunately, Lance is brushed up on the latest rule changes this year as he maintains control of the ball after the catch while falling to the ground. It's a touchdown and the game is tied. The Saints are in position to take over and for Lance to be a hero.