Saints @ Falcons Monday Night Football: In Case You Missed It

Share All sharing options for: Saints @ Falcons Monday Night Football: In Case You Missed It 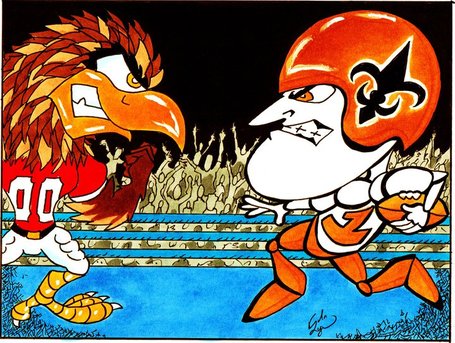 The week started off with a bang after Trent Dilfer opined on ESPN that the Atlanta Falcons were beatable at home and that the Saints could be the team to beat them, Falcons wide receiver Roddy White took to Twitter to twalk some twash...

No chance in hell the Aints come into the dome and win once trent dilfer...The aints fans are so rude we shall see monday night...Yall fans keep talking making it worst for those guys tht got to guard me cause yall don't lol

After getting some feedback from Saints fans he then took it a little too far and said this...

I don't know why everybody mad for the saints I made a comment on wht trent dilfer said on tv it had nothing to do with them...The grace of god gave them tht championship so tht city wouldn fall apart now and now they think they hot #!@%*# in my chad voice child please...The first time we played them their coach gone say after we won the game thts a good win for yall like the saints are the colts...The saints win one championship and want to go crazy well yall ass aint winning this year we gone make sure tht doesn't happen

Eventually, White was made to issue an apology...

I'm sorry. I wasn't trying to offend anybody about that stuff, especially the city of New Orleans.

A collection of our Saints @ Falcons coverage from the past week...

Ask The Falcoholic, Part Two: The Askening - Canal Street Chronicles - The blogger formerly known as Dave the Falconer answers your questions. The resulting thread was informative and hilarious, as usual.

Saints @ Falcons: Holiday Chat with the Enemy - Canal Street Chronicles - Then Dave has our traditional chat with me.

Catch up on this weeks Fleur-de-Links

From the Falcons Nest

Stats v. Stats: Week 16 or "Why Our Secondary (Probably) Won't Get Owned" - The Falcoholic - The enemy compares the Saints and Falcons stats.

Four Critical Matchups In The Falcons-Saints Rematch - The Falcoholic

Listen to our preview show...