Share All sharing options for: 4th and Geaux: Saints at Bengals Edition

Well, I’ve finally awoken from my Thanksgiving coma, and am back in action. The Saints are at the quarter pole of the season, and the home stretch approaches. Will the Saints repeat last year’s role as Secretariat, or will they be more like Zenyatta? Will I stop writing about horse racing since I know nothing about it?

It’s time for 4th and Geaux.

The Thanksgiving game has been analyzed to death, so I’ll be brief this week. But here’s an angle that I haven’t seen discussed that much: last week’s game was a classic case of how luck and hidden plays can transform a game from an easy victory to a close contest.

What am I talking about? Fumbles. We all remember Roy Williams’ fumble at the end of the game (forced by Malcolm Jenkins’ heads-up play), but Dallas fumbled the ball a total of 7 times that game. Now, causing fumbles is a skill, so where’s the luck?

Fumble recovery. The Cowboys recovered 5 of their 7 fumbles and 1 of the Saints’ 2 fumbles. Fumble recovery is largely luck (which is why I never thought fumbles recovered should be a Hall of Fame argument in favor of Ricky Jackson), and if a few of those balls had gone the Saints’ way, we’d have had a much less stressful Thanksgiving experience. At least from a football perspective.

Empty mailbag this week! Makes me sad. Do you have a question for the mailbag? Leave it in the comments or send it via email to stuart (at) whodatreport (dot) com.

However, the Bengals are better than their 2-9 record would suggest. The reason: Cincinnati has played one of the most difficult schedules in the NFL this year, with games against New England, Pittsburgh, Baltimore, Atlanta, and others. The Bengals haven’t had an easy road at all.

That being said, they still aren’t a particularly good team, and shouldn’t pose much of a problem for the Saints, assuming that the weather (forecast high of 37!) doesn’t affect the Saints too greatly. I wouldn’t expect the Bengals to put up too much of a fight, but the Saints are the defending champs, and that can lead opponents to do crazy things…

Cincinnati’s defense has several weaknesses, but the one that gets me most excited is pass rush. The Bengals have 12 sacks this year, and, per Football Outsiders, an adjusted sack rate (sacks adjusted for passing situation, down and distance) of 3.8%, by far the worst in the league. In other words, they sack the quarterback about 1 time in every 25 passes, which is not so good. Poor pass rush plays right into the Saints’ strengths, so Drew "Tee Ball" "Sportsman of the Year" Brees should have plenty of time to throw.

He'll need the time, too, because the rest of the Bengals pass defense is pretty stout. They’re excellent at covering #1 receivers (ranked 2nd in the league, per Football Outsiders) and even stronger covering running backs (1st in the league), but are only average at covering the rest of the receivers. So, this could be another good week for Robert Meachem, Mighty Mite Moore, and whichever of the former University of Miami tight ends you prefer.

The Bengals rush defense is also terrible, so Chris Ivory may have another strong game, depending on how many carries he gets, the health of Pierre Thomas, and whether or not Sean Payton feels like watching Reggie get tackled as he tries to cut back against the grain. If the Saints can get a lead in the second half, they should be able to milk the clock effectively.

One interesting Bengals stat that bodes well for the Saints: the Bengals are terrible at stopping short runs. The Bengals defense has allowed opposing offenses to convert 86% of runs on 3rd or 4th and 2 or less. That’s by far the worst in the league. Even though the Saints have traditionally stunk at power running, I wouldn’t mind seeing Sean Payton call a few runs when we inevitably go for it on 4th down.

The big addition for the Bengals this offseason was Terrell Owens. If you look at his total yardage, he’s having a great year: he’s 3rd in the NFL in receiving yards. However, the receiving yards only tell part of the story: Owens also leads the league with 124 passes thrown to him. If you throw someone the ball enough, then they’re bound to catch a few of them. But not too many: Owens only catches 52% of the balls thrown his way, one of the worst rates in the league.

Of course, it’s hard to separate Owens' performance from that of Bengals quarterback Carson Palmer. Carson Palmer entered the league like a comet, looking to all the world like he was the next Peyton Manning. Whether it’s due to injury, bad luck, or being in a bad organization, it hasn't quite worked out that way.

The upshot is that Palmer is not a dangerous passer at this point in his career. He throws the ball a lot (his 432 attempts are 3rd in the league behind Manning and Brees), but hasn’t been very successful with those throws. The lack of efficiency is reflected in the Bengals’ adjusted Yards Per Attempt (aYPA) stat. The Bengals aYPA this year is 3.57, which would have been in the bottom third of the league last year.

So, while Carson Palmer is in the top 10 in passing yards this year, and has led the league in several weeks, the total yardage doesn’t reflect the fact that the Bengals offense has been very inefficient this year. In the NFL, efficiency is more important than total yardage.

While I tend not to dissect the running game as much in this column, I will point out that the Bengals running backs are terrible. While Cedric Benson has a pretty good raw yardage total, he’s averaged a relatively crappy 3.6 yards per carry and fumbled 5 times.

Well, my local beer store didn’t have any Ohio beers to review, so I’m headed to California to point out a limited release beer that won’t be available much longer. If you absolutely must have a Cincinnati-area recommendation this week, I’ll have to leave the world of beer do have a Cincinnati recommendation: Graeter’s Ice Cream. Graeter’s uses a small-batch, "French Pot" process to make ice cream, and it’s really some of the richest, creamiest ice cream I’ve ever had. My wife is originally from Ohio, and whenever we head to visit her family, I pester her until she lets me stop at a Graeter’s. Good stuff.

Now, to more pressing affairs: this week’s beer. This week’s beer is a limited-release edition from Lagunitas Brewing Company http://www.lagunitas.com/ in Petaluma, California. The beer is called Little Sumpin Wild, and it’s a great one.

Little Sumpin Wild pours a nice golden color, with an almost pure white head. Lots of citrusy fruit with heavy hops, and pine flavor. The hops are different, though…a little funky. The beer is very crisp, with a medium mouthfeel, great carbonation, and a nice finish. I really enjoy this brew, and am sorry to see it disappear soon. Perhaps they’ll make it again next year?

And, I haven’t even gotten to the best part yet: the label. This is my favorite beer label in quite some time: 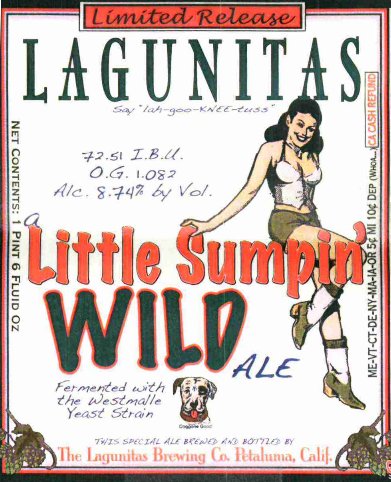 Overall, this beer is great, but will unfortunately be gone too soon. Because of that, I’m going to wistfully rate it a Lorenzo Neal, whose greatness we didn't get to appreciate for nearly long enough.

Sure. Fumble luck kept Dallas in the game last week, even as it allowed the Saints to win it. The Saints shouldn’t struggle this week, because the Bengals offense and defense aren’t really that good. If the Saints do struggle, it’ll be because of the cold or because the Bengals play over their heads. Terrell Owens is overrated, and Carson Palmer really isn’t that good. Graeter’s ice cream is, though, as is Little Sumpin Wild.

You can listen to Stuart each week on The Who Dat Report and the NFC South Report, or follow him on Twitter.